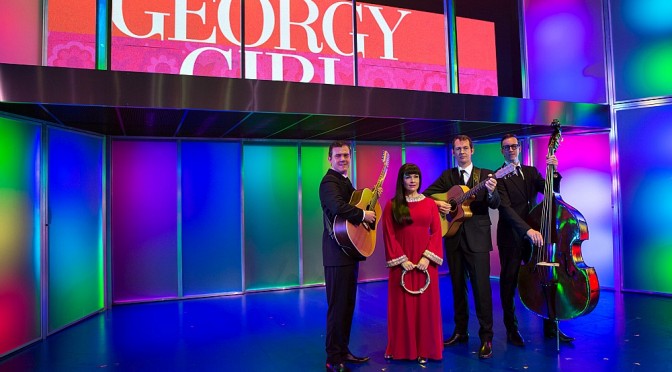 To this day, The Seekers remain one of the most successful musical groups in Australia. They were the first ever Australian band to achieve major chart and sales success in the USA and the United Kingdom, knocking the Beatles and The Rolling Stones off the top of the charts. They were the first and only Australian group to ever appear on The Ed Sullivan Show. More importantly they were loved by millions.

It was a refreshing change to see an original theatre production come to town rather than a revival of one of the classic musicals.

The evening began with a very busy red carpet. Whilst the usual mix of A and D Listers posed for the cameras, all eyes were on the celebrated four upon their arrival.

The musical then follows the group on their journey from their very modest beginnings in small venues in Melbourne to their international success acclaim and then to their eventual break-up.

The use of archival footage and sound, along with excellent costumes, props and set designs seamlessly transformed the stage from a London recording studio, to Graham Kennedy’s iconic television variety show, and a variety of nightclubs.

The band, in point of fact, were together for only a few years but their music legacy lives on with so many memorable hits like I’ll Never Find Another You, A World of Our Own, The Carnival Is Over and their most famous song of all, the Oscar-nominated title song.

Adam Murphy played both a very entertaining and charismatic narrator and Judith’s late husband, Ron Edgeworth, who played an integral role in the group’s success.

In a memorable close to the show, the cast were joined on stage by the original Seekers, and together they were given a standing  ovation

People who grew up with The Seekers will enjoy the show’s nostalgia and the fond memories of the 1960s while younger audiences will partake of a memorable history lesson and appreciate the music, culture and times of Australia during its golden era of entertainment.

Recommended, GEORGY GIRL-THE SEEKERS MUSICAL is playing Her Majesty’s Theatre in Melbourne until the 21st February. The musical is coming to Sydney, and will play the glorious State Theatre from 2nd April  to the 1st May.