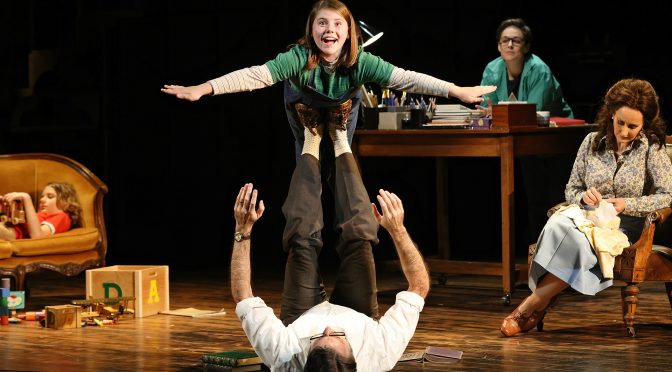 “Nothing takes you inside the soul of a human being like a musical does.”  FUN HOME Book writer Lisa Kron.

Well, I have to say that I have never thought along these lines. Still, after seeing FUN HOME last weekend, I am certainly open to persuasion.

One thing, however, that I don’t need any convincing about, is that theatre, in general, is a wonderful medium to bare one’s soul, to tell stories from one’s life, of-course with some necessary dramatic/poetic licence.

One only has to think of Tennesee Williams unbearably moving autobiographical play ‘The Glass Menagarie’. The character Tom is the Williams character who heartbreakingly plays the play’s narrator as he charts the course of life with his mother Amanda and his older sister, Laura.

FUN HOME actually began its journey as a very successful 2006 graphic memoir written by Alison Bechdel. Two bright New Yorkers had the beautiful vision to mould it into a work of theatre.

In 2013 the stage musical adaptation premiered off Broadway with the book by Lisa Kron and music by Jeanine Tesori.  The  musical went on to play Broadway and a US national tour, going on to win Tony Awards for Best Musical, Best Book Of A Musical and Best Original Score.

The stage adaptation begins with Bechdel sitting at her writing desk reflecting on what to write next in her memoir. We then go on to see her life story unfold via two different time periods in her life.

The first is her childhood (Small Alison), around ten years of age, focusing on her diificult relationship with her father Bruce, and the second period takes place during her first year at University (Medium Alison) during which time she has her first relationship and comes out as a closet as a gay woman.

The play’s rather awkward title is a jibe by Bechdel about the very mixed feelings that she had growing up in a family home that included, of all things, a funeral parlour! One of her father’s multi-tasking jobs was as the Manager of this funeral parlour.

In a scene of great black humour, little Alison and her friends play around manically in the funeral parlour, jumping in and out of a coffin. The audience loved it!

There was an ache, I can’t think of a better word, that ran through the play. It felt like the ache of human frailty. And it mostly stemmed from Alison’s father, Bruce.

Alison looked up to her father Bruce for love and guidance, as any daughter would. What she was to learn as the mature Alison, looking back on her life, was that her father was at the mercy of a sexuality that he was unable to master and accept.

In his program note, Sydney Theatre Company Artistic Director Kip Williams wrote that some subscribers, over the years, had been tapping him on the shoulder to put on FUN HOME after they had seen it on Broadway.

Williams placed this much loved play in the hands of Director Dean Bryant and Associate Director Clemence Williams. They have tended to it with much love and care, and have come up with a memorable production.

They win very fine performances from the cast. As the three Alison’s, Lucy Maunder as the writer, Maggie McKenna as the medium Alison and Mia Honeysett as the small Alison were superb. Adam Murphy gave a wonderful, heartfelt performance as the father Bruce. Marina Prior impressed as Bruce’s long-suffering wife, Helen. Emily Havea was memorable as Alison’s first love, Joan. Ryan Gonzalez was excellent in a variety of small roles. The child actors were all great, with special mention of-course to Mia.

Alicia Clements intricate revolve set is a stand out. There is one scene in the play which is breathtaking. The revolve which regularly turns and shifts during the performance takes one spectacular turn which reveals the lovingly and painfully detailed, by an obsessive father, family home.

Opening night saw the cast receive a standing ovation. A nice touch was when just Adam Murphy and the three Alison’s; Mia Honeysett, Maggie McKenna and Lucy Maunder came out and took their own bow.

A note to end on. The theatre industry, especially when it comes to big musicals, is full of hype. In a way the industry needs it, to draw in audiences. To cover the cost of big budget shows. Much of the hype is overblown, and one leaves a show disappointed.

Not with this play. FUN HOME is special.