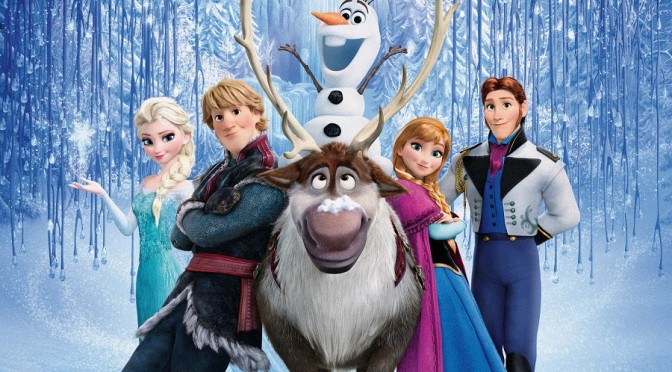 From the world of 19th-century children’s literature and very loosely based on the Hans Christian Andersen fairy tale “The Snow Queen”, in this century good and evil have become psychologically complex, and also not so clear-cut, and with coherent storytelling we learn that a princess now has to show all her strengths and work to earn her happily-ever-after ending.

Set in the fictional kingdom of Arendelle, the beautiful blond, high-strung princess Elsa (Idina Menzel), and has a secret magical problem. Everything freezes when Elsa waves her un-gloved hands. Her impulsive redheaded younger sister, Anna (Kristen Bell), was nearly frozen to death by accident by Elsa the Snow Queen. Anna suddenly falls in love at first sight with Hans (Santino Fontana), a scheming and opportunistic but otherwise is a too-good-to-be-true picture-perfect prince, but Elsa forbids their marriage. Elsa causes eternal winter in the kingdom of Arendelle.

As Arendelle suffers through the deep freeze, the resourceful Anna, who still loves her sister, is determined to track down Elsa, who she believes can reverse the magic spell. Thus begin Anna’s epic journey of adventures in mountain climbing. Anna meets a rugged ice dealer Kristoff (Jonathan Groff), and his sidekick reindeer Sven. Encountering mystical trolls, they are joined by the wisecracking and adorable snowman Olaf (Josh Gad), with buck teeth plus a carrot for a nose, who longs to sunbathe because no one ever told him that heat melts ice.

Everest-like extremes and magic at every turn, Anna and Kristoff battle the elements in a race to save the kingdom from destruction. As always, love is the solution to everything, and it is indeed love that does the trick, however this time it is sisterly love plus devotion as well as loyalty.

Before the movie begins, there is a brand new cartoon short “Get a Horse!” from the Walt Disney Animation Studios, that re-uses old audio of Walt Disney’s voice for Mickey Mouse.

Disney Animation has created a new classic animated movie musical, shown in 3D in some cinemas, and “Frozen” is immensely suitable for all ages, including adults. “Walt Disney Animation Studios” 53rd feature film “Frozen” was the #5 all-time biggest animated film in Australia, and the second biggest animated film of all time globally. A special sing-a-long version of “Frozen” is now being shown on weekends in select cinemas, which my kids just simply loved having permission to sing all the songs aloud together with every other child in the audience.

FROZEN has eight original songs by musical theatre veterans,Kristen Anderson-Lopez and Robert Lopez, their score easily capturing all the charm of earlier Disney animated film scores with their playful wit and sentimentality.

“With FROZEN we knew we had something truly special on our hands, and it has connected with fans and filmgoers around the world in a way we only dreamed was possible,” said Alan Horn, Chairman, The Walt Disney Studios.

FROZEN has won many awards including Two Academy Awards, winning the Best Animated Feature. In Australia from 30th April 2014 on 3D, Blu-ray, DVD & Digital. The in-home version of FROZEN promises a blizzard of never-before-seen bonus extras to add depth to the gorgeous animation, memorable characters and unforgettable music of the film.

FROZEN has now grossed $1.097 Billion worldwide as the 9th largest movie ever,  with speculation in play that it could now go as far as 6th of all time behind Iron Man 3.  FROZEN is still selling its music soundtrack CD in huge quantities, and its soundtrack is the biggest seller in the last six years,  and is still #1 in the USA. FROZEN also sold more DVDs in the UK in two days than “Hunger Games: Catching Fire”  did in the uber-big first week of DVD sales, and FROZEN is outselling it in the USA.