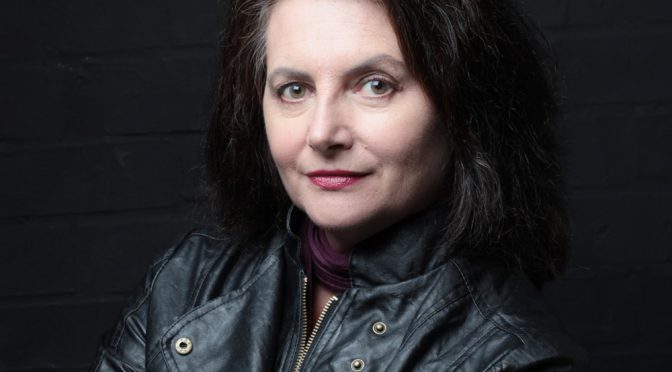 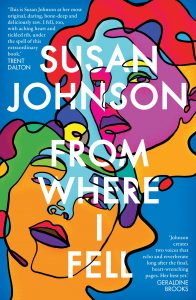 Marriage is a living entity- tidal veiled even to husband and wife. Who is to weigh its disappointments and mistakes, its myriad acts of hurt and kindness?

The weighing is done on the scales of correspondence between Pamela Robinson and Chris Woods, a correspondence started in error that begins Susan Johnson’s latest novel, FROM WHERE I FELL.

Pamela is feeling the aftershocks of her divorce from her husband, Christophe Woods and has reeled off an impassioned email to him, sorrowful for the dissolution of their marriage, sorrier for how it has effected their three sons.

Instead of landing in Christophe Woods’ inbox in Paris, the message finds its way to Chrisanthi Wood’s cyber address in Schenectady, New York, and so begins a correspondence that lasts three hundred and thirty eight pages.

An exemplary example of the epistolary novel, FROM WHERE I FELL is a confessional where the penitent does not always receive absolution from her confessor.

Admonishment rather than absolution is the penance meted out by Chrisanthi, frustrated by her unsolicited pen pal’s endless reflection.

“I don’t want to be rude, but you do enough reflection for the entire population of Australia. There’s a fine line between reflection and self indulgence.” writes Chrisanthi deep into the correspondence.

And this is not just Chrisanthi’s view. Pamela’s analyst, Tunde tells her that endless reflection is insufferable. Endless rumination a form of suffering of her choosing.

Fine lines filigree FROM WHERE I FELL, a fretwork of crossings, border skirmishes, and disputes on demarcation between two women in far flung locations connected by confusion and concern. It’s also full of fine lines, as in finely written lines, rebukes, rebuffs, retorts, home truths. Pamela may confess she has lost her sense of humour, but, thankfully, the author has not. There is rib tickling to be found among the heart ache.

Pamela gives Chris the appellation Socrates, Chris returns with Dear Plato, and their emails do take on a philosophical stance.

This pragmatic, sanguine Socrates certainly has sage advice for the over anxious and pessimistic Plato: The only way to live is forwards. You know what happened to Lot’s wife.

FROM WHERE I FELL is about a long distance relationship and a particular dichotomy – Pamela trying to piece her life and the lives of her sons back together, Chris packing up a life, sort of, and heading back to the future.

In this techno age of email and Twitter, one of the questions raised in FROM WHERE I FELL is: Can people be friends in the absence of their bodies? And what function do they serve that embodied friends don’t?