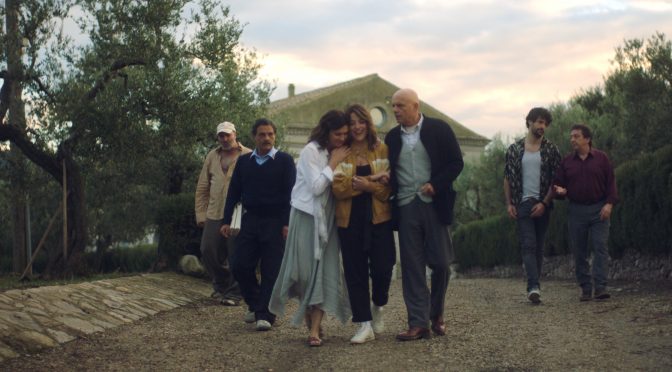 Joe Pantoliano plays Marco Gentile in FROM THE VINE, a mid life crisis return to your roots scenario based on the award winning novel of the same name by Ken Cancellara.

Pantoliano has made a career playing hard arse characters in series like The Sopranos and movies like MEMENTO, and it’s refreshing to see him soften somewhat in this wistful romantic comedy laced with magic realism.

Park the pervading tone of privileged despair and enjoy being driven around the region of Acerenza, as picturesque as any Italian province with its fair share of laid back lunatics including cops, squatters and priests.

After an altercation with the board of which he was CEO, Toronto based Marco decides to return to the area of his birth and restore his grandfather’s vineyard.

With little consultation with his wife, Marina, he lands in Acerenza, closes his retirement account and sets to making wine. She follows some weeks later in high dudgeon but she too falls under the spell of the more relaxed atmosphere of small town Italy as opposed to pressure cooker Canadian city.

Then his estranged daughter, Laura, flies in, in even higher dudgeon, and lo and behold, she is smitten by the place and a personable young Italian man.

It’s rom mom com and daughter too, so FROM THE VINE is a family affair, celebrating la dolce vita.

The cast is attractive, with Wendy Crewson as Marina, Paula Brancati as Laura, and Melbourne born Marco Leonardi as the local cop, Luca, a lovely louche and laconic performance.

Willem Wennekers workman like script suffices, ditto Sean Cisterna’s direction. The heavy lifting is the casting and the cinematography by Scott McClellan, who beautifully captures the stunning streets, country side and architecture of this amazing location.