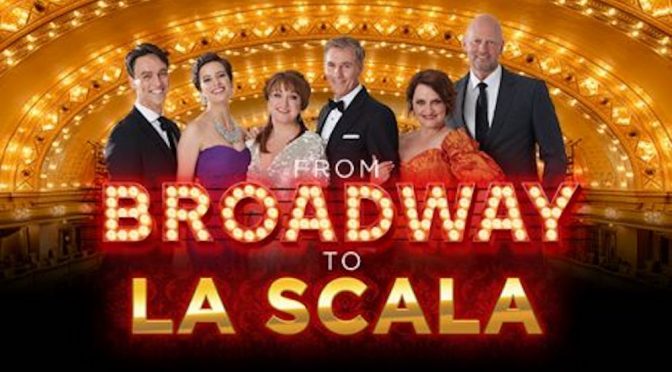 This was always going to be a treat as indeed it was. There was a great mix of  songs from Broadway shows and from the opera world.  They were performed by six of Australia’s finest contemporary singers. They comprised the lyric colorature soprano Emma Matthews, much loved tenor David Hobson, acclaimed bass baritone Teddy Tahu Rhodes, Broadway star Caroline O’Connor, brilliant young Australian tenor Alexander Lewis and emerging artist Genevieve Kingsford. They were backed by  a full orchestra conducted by Vanessa Scammell.

I loved the arias still have to say that the Broadway tunes were my favourite. Caroline O’Connor gave a rousing version of ‘Broadway Baby’., Alexander Lewis’ rendition of ‘Anthem’ from Benny and Bjorn’s ‘Chess’,  Genevieve Kingsford’s poignant version of ‘Till There Was You’ from Meredith Wilson’s ‘Till There was You’, Almost Like Being In Love’ from ‘Brigadoon’ by Alan Jay Lerner and Frederick Loewe performed by David Hobson and Genevieve Kingsford, If I Were A Rich Man’ from Jerry Bock an Sheldon Harrick’s ‘Fiddler On The Roof’ performed by Teddy Tahu Rhodesa and ‘A Little Priest’ from Stephen Sondheim’s ‘Sweeney Todd’ performed by Teddy Tahu Rhodes and Caroline O’Connor.

This was a great way to spend a Saturday afternoon hearing beautiful voices singing great tunes. All the performers seemed to be having a great time of it. The women were all frocked up beautifully. Each song was introduced by the performer. There was a bit of fun byplay featuring  Caroline O’Connor as she piped up to her colleagues that she wanted to have a go at one of the opera songs. It might be Caroline O’Connor however her request fell on deaf ears.

Today’s show at the Concert Hall of the Sydney Opera House, combining the exuberance of musical theatre with the passion of grand opera, has now finished its national tour which started in Adelaide back on 7th September.

Hopefully we will see  ‘Broadway to La Scala’ concert  return  again  in the next few years.