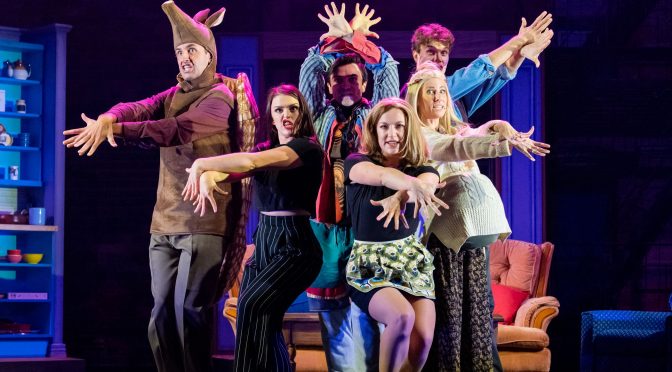 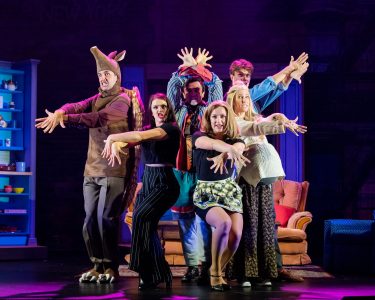 FRIENDS! THE MUSICAL PARODY skips lightly past issues of predictability and copyright of the popular NBC sitcom which aired from 1994. Fans leave bubbling over with commentary and amazement at how the writers were able to deliver this in less than two hours. Currently on a national tour, it’s playing at Riverside Theatres in Parramatta until Saturday 18th June.

A typical day in New York coffee shop, Central Perk, is interrupted by an unexpected runaway bride. She sets off a fabulous romp through work, life, infatuation, dating disasters, heartbreak, job and finance roller coasters and childbirth (giving birth to your brother’s triplets). All of this is underpinned by songs such as: Dead Mom; 2 Girls 1 Condom; The Fetuses Song and Oh My God It’s Janice. Audiences fondly remember the seven erogenous zones, Joey wearing Chandler’s clothes and Ross’s horror at his sandwich being eaten by someone else at work.

A stellar Australian cast injects enthusiasm and skill to the music by Assaf Gleizner and book and lyrics by Bob and Tobly McSmith. They are acclaimed musical theatre performer Annie Chiswell (Shrek, Mamma Mia!) as Monica, Belinda Jenkin (50 Shades! The Musical Parody, Top Gun the Musical) is in the role of Phoebe, and Eleanor Macintyre (The Hello Girl, Sweet Charity) as Rachel. WAPPA graduate Maverick Newman (The King and I, Spring Awakening) plays Chandler, Conor Putland (Once on This Island, Dogfight) is Joey, and Tyran Stig (The Drowsy Chaperone, Little Shop of Horrors) makes his professional debut in the role of Ross. Dom Hennequin (Violet, The 25th Annual Putnam County Spelling Bee) plays Gunther, while Callum O’Malley (The Wind in the Willows) and Lucinda Wilson (Grease) are the swings.

With credit to the set and costume designer, Frances Hannaway, there are quick changes for the appearances of Janice (an audience over-the-top favourite), Richard, Paolo and Estelle.

Enthusiastic applause from the audience from at least one performance showed that all cast performed well. On the June long weekend Callum O’Malley seamlessly filled in for Maverick Newman as Chandler. The casts’ musicality was obvious. Tyran Stig was able to achieve the transition of gawky acting to smooth singing in his role as Ross. Belinda Jenkin portrayed Phoebe well in both acting and Phoebe’s own song performances. Conor Putland ensured that he was just that bit more energetic than the ensemble perhaps in an attempt to prove that Joey was the ‘real actor’. Eleanor Macintyre as Rachel and Dom Hennequin were strong in their foreground and background roles.featured

The show has been directed by Dash Kruck, with choreography by Cameron Mitchell, set and costume design by Frances Hannaway, lighting design by Jason Glenwright and musical direction by Steven Kreamer.

This is a fun parody of the original sitcom without any new political statements or current day updates. As the Director, Dash Kruk, says: “Friends! The Musical Parody has little other purpose than to make you feel good”. It definitely over-achieves this goal.

Do you have to be a Friends fan to enjoy it? Definitely not! It’s still funny, bright, happy, and at times cringe-worthy. Audiences are drawn in quickly warming to the quirky characters and their heart strings are tugged. Of course, fans will have a good time getting many more of the jokes.

Be warned: Good performances of endearing characters may make you rush off to watch the whole series again or even for the first time – because 2 hours is not enough.

FRIENDS! THE MUSICAL PARODY is playing the Riverside Theatres until 19th January 2022.