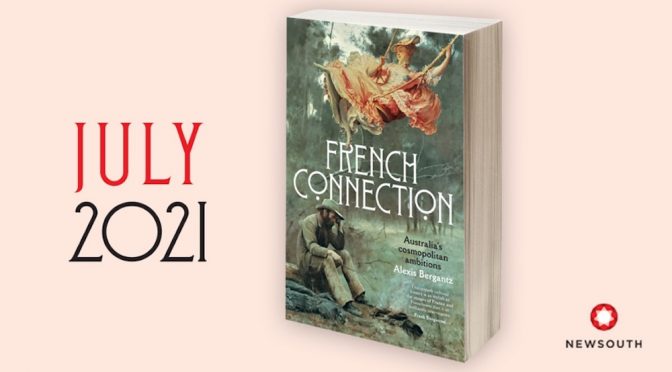 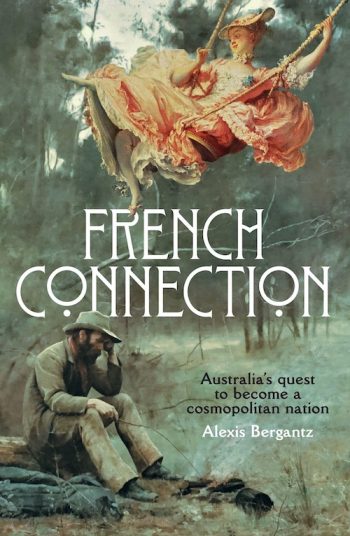 With an introduction and epilogue, this book is divided  into six chapters and also includes an appendix, notes, a bibliography and an index, plus some illustrations. It is not too large and bulky and is densely crammed full of information with many layers of meaning. The main time frame it examines is roughly from the 1850’s up to 1914 but it also continues a little to this day. Bergantz jumps backwards and forward a little and interweaves timelines and details…

Bergantz looks at the role of the French here in Australia, and our interaction with them in Europe, and how attitudes have changed over the years. From interactions with early French explorers, for example Bougainville and La Perouse, to haute cuisine and  couture and sophisticated culture.

How was Australia viewed by the French and how did Australians view them?  How did this contrast with the attitudes and expectations regarding the British? The lives of French migrants are also examined – could they adapt? How? What sort of work did they do?. Particularly at first, they were mostly teachers of the French language but the number of those in other industries also developed.

Bergantz looks at the influence of the French on education here in Australia but also French luck, or otherwise, on the goldfields and the cloth/wool trade as examples.

How did the French occupation in the Pacific and environs affect Australian and international politics? The Dreyfus Affair caused great contention. Also how Indigenous Australians were treated by the French. The – generally –  hostile atmosphere towards French convicts, particularly from New Caledonia – although some were treated with kindness, others had to keep their past life a deep secret.  Some French consuls in earlier times really made faux pas – and in our own time for instance there’s the French nuclear testing in the Pacific and the wreck of Greenpeace’s Rainbow Warrior.

At one stage Paris was regarded as the centre of the artistic world, with the ‘ Bohemian’ life, its cafes, museums, galleries and more. Artists – especially of the Heidelberg school – and writers and journalists from Australia visited and were influenced. Not forgetting opera, music and ballet. We learn how the planning and layout of French cities influenced the design of Sydney, Canberra and Melbourne. We learn how the French were heavily involved in the development and expansion of Sydney’s North Shore, especially Hunters Hill. And mention is made of the cross-fertilization in the sciences and also the development of the exclusive wineries here.

The concept of ‘honour’  and the idea of ‘femininity ‘ and how women were regarded is examined in detail. There is a fascinating analysis of letters from two generations of the Delarue family; father Leopold and daughter Alice who were in France twenty years apart. Alice chafes at the annoying restrictive way women were treated, constantly monitored and chaperoned in France, and not allowed to attend events simply because she was female.

There is a fascinating look at the creation, development and  volcanic politics of the early Alliance Francais years, particularly in Melbourne .

As well, Bergantz examines the artistic influences crossing borders both ways./ For most of the main period discussed it was a major event to travel to Europe, but then travel and communication became much faster and artistic ideas and influences became more fluid in both directions.  In 1914, the first ever Melbourne to  Sydney flight was piloted by a Frenchman.

A fascinating look at changing ideas and interactions between Australia and France.