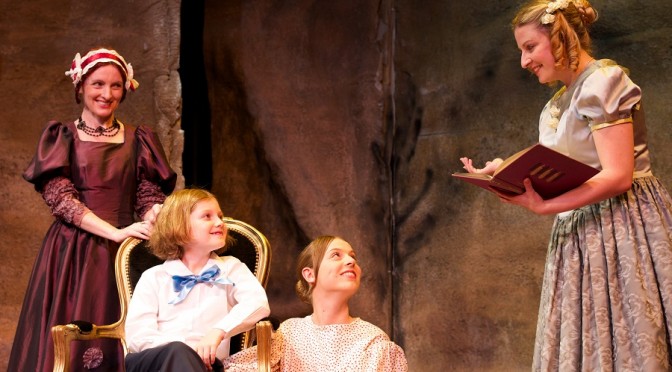 The various strands of Mary Shelley’s creation are stitched together well in this 1981 adaptation by Victor Gialanella. Whether it be a Gothic novel-style romance, a moment of truly violent horror, or a sci-fi laboratory scene, the script benefits from Gianella’s skills honed as a writer for TV amongst other genres.

In general, the script and action used for production of the classic tale is concise and well-paced. The audience benefits from emotional immediacy and economical exposition. The presentation of larger issues are in this way effectively and clearly offered to the modern audience.

Striking set design throughout is well lit and is consistently a great support to the energetic cast. Rock-like textures work well as a backdrop to both exterior scenes and the ominous interiors of Victor Frankenstein’s mansion. The undulating, accelerated mind of a secretive experimenter pushing boundaries is also evoked.

The design of Frankenstein’s laboratory or lair of uncontrolled ambition is a creative highlight bursting forth from the rear of the Genesian Theatre. Modern lovers of sci-fi, Marvel comics, and Shelley’s tragedy will not be disappointed by the detail.

From such a backdrop emerges the creature. Wordless pain, tortured humanity and vulnerability contort a consummate portrayal by Vincent Andriano. This performance continues to command our focus with his hands, heart, and virtuosic vocals in a finely rendered race to Gialanella’s revenge scenes. These moments unfold with a modern news story denouement oft reserved for a twisted sociopath.

Contrasting scenes dealing with Shelley’s study of appearance, isolation, cruelty and friendship are played with considerable chemistry between Michael Heming as the blind De Lacy and Andriano. There are well-nuanced moments illustrating the outcasts’ scars on both the inside and out.

Wealthy society is brightly and beautifully costumed in this production. Dimitri Armatas is a well-dressed and coiffed Frankenstein. His performance is most rewarding during periods of unbridled ambition and restlessness, delivered in accordance with the forward motion of Gialanella’s script.

The ensemble is well cast. Amongst them, the characters of Frau Mueller (Emily Pollard) and Elizabeth (Cassady Maddox) also deserve mention for their suitable appearance and fluid delivery. These portrayals provide the foil to male motivations and mistakes as tension mounts. They elegantly encourage the romance necessary for the formulaic horror which finally and ferociously kills.

For more about Frankenstein, visit http://www.genesiantheatre.com.au