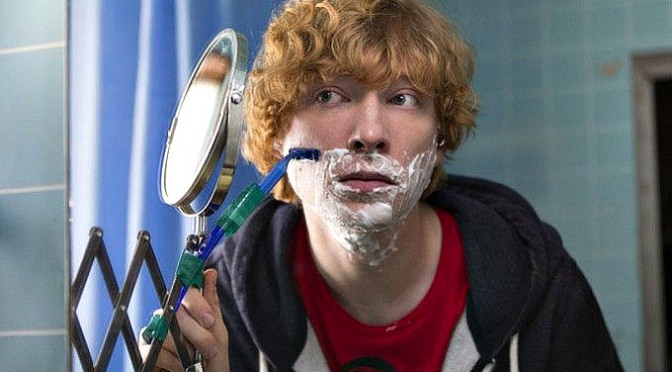 The Soronspfrbs (that’s actually spelt correctly) are a strange alternative indie rock band; they sound like early Floyd among others, the keyboard players tend to kill themselves and Frank, the lead singer, wears a big smiley paper mache head, all the time – even in the shower. Jon (Domhnall Gleeson) is a young keyboard player who scores a lucky gig which lasts half a song. For no particular reason they invite him to Ireland for a ‘thing’ without telling him it’s to record an album. He starts recording them and putting them up on YouTube without telling them… and soon fame beckons, which seems to be the last thing they want.

The new film FRANK is loosely based on the true tale of Chris Sievey, aka Frank Sidebottom, as told by band member and script writer Jon Ronson (who wrote this and ‘Men who stare at goats’ with Peter Straughan). Frank was a cult 80s pop figure who wore a mask (apparently there’s a statue of him in his home town of Timperly, England) which explains why it feels so real and lacks too much depth or subplots. It’s so honest I forgot it was a comedy at times. The actors play the instruments, Carla Azar was Jake White’s drummer and The Soronspfrbs aren’t too shabby, even though that might be aim.

And you have to like the mask concept. Apart from the obvious analogy to the human condition, they also reflect us- in the absence of emotional cues, we see what we want to see.

Director Lenny Abrahamson has given us a great quirky offbeat comedy with a fine cast – Michael Fassbender plays Frank, and even under a mask this guy can out-act most. He gives Frank more charisma than Kidman (at least with Frank you know his frozen smile is created by paint not botox) and he charms Jon, the band, strangers and eventually the audience.

Maggie Gylenthaal plays the intensely menacing Clara, Scoot Mcnairy is very warm as Don and Domhnall Gleeson does well as Jon, our red haired narrator (and being a ranga, you know he’s up to no good).

Frank has a good heart and in one almost innocuous line it says something about the pain that artists are supposed to feel that slapped me in the face – and I didn’t mind the sting – and it also says something about being an outsider in a generic world. This is a very likable film and the last haunting Cave-esque song is still haunting me. 3.5 disrythmic beats/5.

The first Sydney screening of FRANK takes place at the Sydney Film Festival on the 7th June.