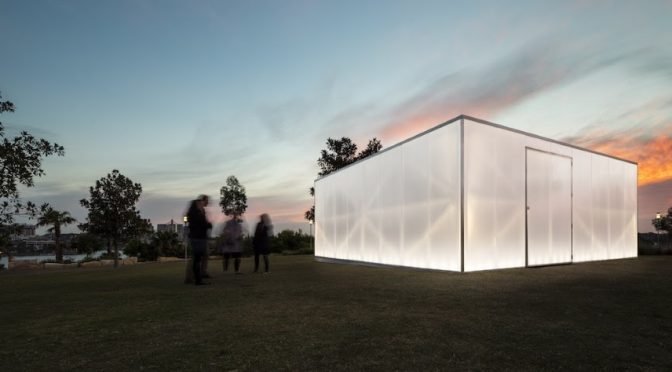 Urban Theatre Projects (UTP) will be installing its surround-sound pavilion, BLAK BOX at Blacktown Showground Precinct in the heart of Western Sydney, in partnership with Sydney Festival and Blacktown Arts.

The state-of-the-art surround-sound space captured the imagination of Sydney-siders when unveiled earlier this year at Barangaroo and now a brand-new program of works – FOUR WINDS – has been curated by Daniel Browning with elders, young people and musicians from Blacktown, Australia’s most populous urban First Peoples community.  FOUR WINDS draws on the oral history and speculative future of Blacktown and Greater Western Sydney from the perspective of Blacktown Elders and teenagers.

The pavilion explores the need for greater dialogue between younger and older Aboriginal people – both of whose voices can go unheard in the national conversation. Four Winds is both a remembering of the past and a collective vision for the future.

An intimate inter-generational dialogue is led by respected Elders Uncle Wes Marne and Aunty Edna Watson who have lived and worked in Blacktown on Darug country for most of their lives.  Curator Daniel Browning deftly weaves the conversation with two young leaders, Savarna Russell and Shaun Millwood, who first met with Uncle Wes and Aunty Edna on a cultural camp. In conversation, they share immense wisdom and explore the joys and challenges of contemporary living.

The work is informal and inquisitive, sombre and funny, gentle and insistent, powerfully highlighting the urgent need for all their voices to be heard.

Songwoman, Emma Donovan, whose family have created and made music together for generations in the Blacktown area, will respond to the stories in song with Darug words gifted by Aunty Edna. Emma will collaborate with violinist Eric Avery whose compositions seamlessly merge deep cultural traditions with classical forms.

BLAK BOX embraces the First Peoples concept of ‘deep listening’ which is based on stories, silences and the spaces that lie between. It is an innovative model that encourages audiences to step inside BLAK BOX and simply listen to sound, ideas and language from a First Peoples perspective.

Urban Theatre Projects (UTP) will be installing its surround-sound pavilion, BLAK BOX at Blacktown Showground Precinct in the heart of Western Sydney, from 9 January to 2 February 2019, in partnership with Sydney Festival and Blacktown Arts.  See a trailer here.