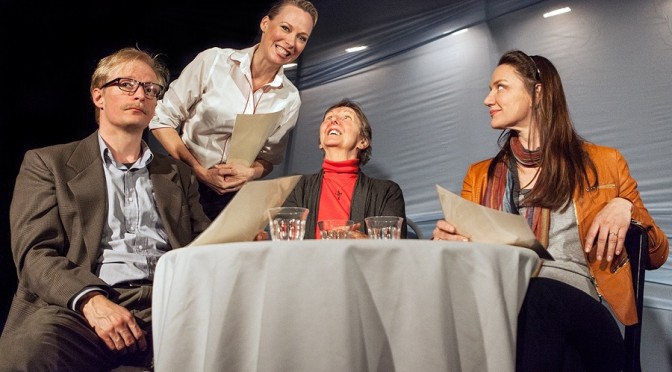 Their inaugural production, Joel Drake Johnson’s FOUR PLACES, is a good one for the intimate confines of Tap Gallery Upstairs Theatre, where a simple revolve by designer Tom Bannerman allows the small space to morph from motor car to restaurant and rest room fairly seamlessly.

The set-up is simple – siblings Ellen and Warren are taking their mother, Peggy, to lunch at her favourite eatery. It’s something daughter and mother do regularly, a weekly respite for Peggy from her care of her ailing husband,  but the son’s attendance is unusual.

The unusualness is heightened when it is revealed that Warren, a teacher, is playing truant, while insisting to Peggy that he is enjoying a pupil free day.

The fib is a portent of a darker subterfuge, as the still waters of middle class family life are stirred by suspicion and the sediment of the past surfaces to cloud the present.

Ambush and kidnapping are more usually the precinct of police procedurals, but in the modern milieu of filial duty, confusion about how to deal with mental and physical deterioration in ageing parents phases from felony to some sort of justified fidelity. It’s a confusion idea rather than a Confucius idea of filial piety.

Johnson’s script is comic, cutting, and layered, chipping away at our collective insecurities and fears.

Director Nicholas Hope, keeps the production crisp, brisk and nimble, navigating the narrative with a fine cast and crew, eschewing American accents, all the better to focus on the universality of the piece.

Amanda Stephens Lee and Jeremy Waters are super as the siblings on simmer, the motives for their actions fluid as a bubbling cauldron and just as prone to boil over.

Kim Hillas as the pious Peggy (she contemplated convent life before she married) provides a palette of shade and colour, from the pragmatic to the puzzled, endeavouring to deal with the  peripatetic  predicament with her partner and her progeny, relying more on plonk than prayer to oil her coping mechanism.

Bolstering the fourth place is Briony Williams as the suitably named Barb, the waitress, sharp of tongue and timing.  Her playing of the intuitive foil is a treat.