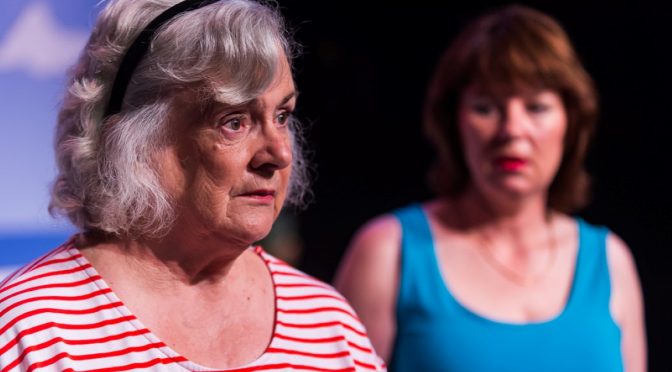 FOUR FLAT WHITES IN ITALY is the first in Castle Hill Players’ 2018 series of productions. Written by the New Zealand playwright, Roger Hall, it is a comedy with some memorable one liners but it also looks at a deeper side of relationships. Being about two New Zealand couples if of course contains rugby and a few cutting remarks about Australia adding to the humour of the script.

This is the story of Adrian and Alison, retired librarians who have decided to take their holiday of a lifetime in Italy with a couple they’ve known for years. However shortly before leaving these two friends have to pull out. Who will take their place? Wealthy neighbours Harry, a retired plumber, and his new wife Judy offer to come along but will all the ups and downs of their longed for Italian holiday be disaster or delight for these mismatched couples.

Via the narrator Adrian, played with much skill and feeling by Stephen Snars, we are kept up to date with what is happening and the inner workings of the different personalities. The first half of the play is a series of light-hearted scenes as these two couples face the differences in their budgets, politics and attitudes to life touring Venice, Rome and then on to Tuscany. The second half in set in Tuscany and reveals more of the struggles and challenges in their lives.

Annette Emerton as Adrian’s wife presents the picture of a most organised librarian, we later learn why, and is committed to seeing the sites recommended in the Lonely Planet Guide book, unfortunately in a rather bossy way. Her coming to understand herself is touching and works so well because of the interactions with the other characters.

Larry Murphy as Harry at first appears to be little more than an annoying travelling companion telling his sexy jokes but we come to see his more vulnerable and supportive side. His wife Judy, played by Margaret Olive, is definitely not just the trophy wife. All have their stories and in the two hander and four hander scenes all get to tell their story and develop more meaningful relationships.

Aurel Vasilescu and Michelle Masefield are excellent in their multiple roles as “male” and “female” Italians from receptionist to centurion to Count and Countess. They help us see the principal characters as tourists, adding local colour and bringing the Italian setting to life.

A wonderful job as been done by the set designer Steve Wimmer supported by the scenic art, screen art and set construction team. Painted back drops, bedrooms, a terrace in Tuscany and much more all move us from one location to the next. The scene in the car is perhaps one of the funniest in the play and one to which almost the entire audience could relate.

Strong direction by Carol Wimmer brings all these characters together in a highly entertaining and funny play until at the end we empathise and enjoy their final pleasure.