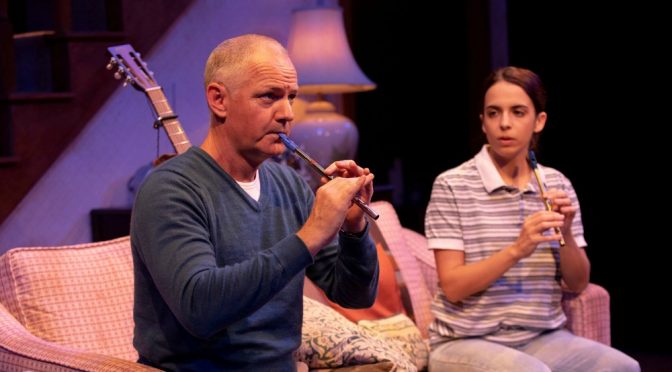 FOLK by English playwright Tom Wells, is a simple story of faith, loneliness, unlikely friendships and the healing power of music.

Delightfully irreverent and fun-loving Irish nun, Sister Winnie, (Genevieve Lemon), has befriended 50 year old Stephen, (Gerard Carroll), a reclusive, withdrawn guitarist and folk singer who is too shy to sing in public. Winnie loves a Guinness and a good time so each Friday night, she has Stephen over for some raucous slapstick and singing.

Genevieve Lemon as Winnie fills the stage with her excellent delivery of one-liners, compassion and infectious energy. After another Guinness and quick cigarette at the window, she quips to Stephen, “Sing me something holy – something wholly inappropriate”.

A mysterious brick is thrown through the lounge room window and Winnie, without anger, chases after the 15 year old culprit, Kayleigh, (Libby Asciak), and invites her in.

Stephen is not happy. The three unlikely characters fall into harmony through Winnie’s generosity of spirit. We find out that Kayleigh’s mother has passed away and she is pregnant. She knows a lot of the Irish ballads that are being sung and is surprisingly good at playing the penny whistle that Stephen made.

Inspired by their love of music, Winnie decides they should form a folk club called “What The Folk”.

There is tenderness in Wells’ writing. Winnie’s heart is failing as a result of angina, but she will only joke about it. The others are worried but cannot break her spirit. They do some formidable singing together, all three actors do the harmonies great justice.

Libby Asciak is complex and fragile as Kayleigh. She is at ease on stage, very talented, and gives a wonderful performance.

Gerard Carroll is appropriately cold and distant as Stephen, with a great warmth when singing and playing. He is truely attached to Winnie, his best friend. He gradually accepts Kayleigh as the play progresses. Carroll’s eye contact with the audience at the beginning of the play perhaps weakened his character’s vulnerability but it returned again, and stronger towards the end.

Director, Terence O’Connell, became a great fan of Tom Wells after directing his play The Kitchen Sink in Melbourne. He has kept the pace of the production sharp and the mood contagious with humour and pathos.

The creative team, including Hugh O’Connor (Set & Costume design) and Trent Suidgeest (Lighting Designer) have contributed to the success of the play.

FOLK is an enjoyable play. It is 90 minutes long with no interval and plays at the Ensemble Theatre until June 1st, 2019.