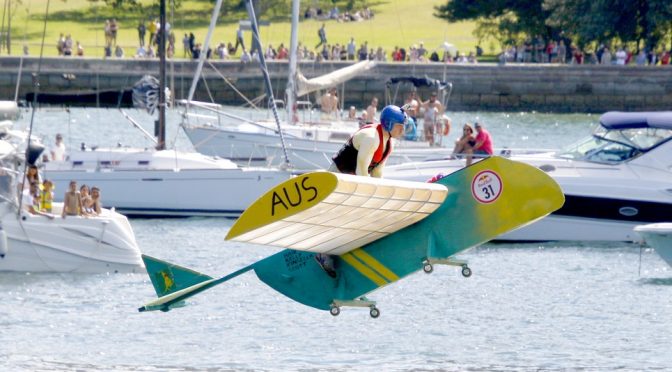 Flugtag is German for flying  day. Sponsor Red Bull’s drinks are supposed to give you wings. The fullest realisation of this is in their air shows which are held round the world. A single engine craft undergoes a time trial whereby it must fly around obstacles which sometimes require amazing aerial stunts. The fastest pilot and plane through the obstacle course is the winner. Red Bull sought permission to hold the event over Sydney harbour but this request was refused. This show has been held in Perth over the Swan river..

Nevertheless we received a consolation prize when Sydney held its first ‘Birdman Rally on the 6th April 2008. Red Bull actually started these rallies in 2000 and they have been held every year since in over 35 cities globally.

Sydney had to wait another ten years to hold Flugtag which  took place on the 10th November 2018. No other city in Australia to date has held a Flugtag. It was held at Mrs Macquarie Chair where a crowd of over 50,000 watched with amusement as aircraft of all shapes and sizes plunged from a six metre platform into Farm Cove, Sydney harbour. The backdrop to this event was Sydney’s spectacular cityscape, including the Sydney Opera House and the Harbour Bridge.

Sydney’s criteria is different from those in other cities. The wingspan must be not bigger than 8 metres (26 feet) and the weight (not including the pilot) is limited to 180 kilograms (400 lbs). The  contraption must be powered only by muscle and gravity and any battery or engine assistance is strictly prohibited. Because the aircraft will inevitably end up in the water it must be unsinkable and constructed entirely of environmentally friednly materials and must not have any loose parts.

Each team comprises four  people, three to push the craft and one  to ‘pilot’ it.

Teams that enter the competition are judged according to three criteria- distance, creativity and showmanship. Included under showmanship is the requirement for the team to choreograph and perform a short dance prior to take off.

Team creativity ran to creating crafts such as the Splashed Avo, a dinosaur named Flyrannosaurus, and a barbecued themed craft called The Sore Sage Sizzle.

A  crowd favourite was the Bin Chook comprising of a paper mache Ibis in a wheelie bin.

However the winner was Chip Off The Block which was a seagull and chip themed flying machine. In second place was the Flying Ricciardo, basically a racing car,  and in third place was won by the Red Baron modelled on a World War 1 military aircraft.

This year’s contestants did not ‘fly’ anywhere near the world record which was set in Long Beach, California when a craft flew 258 feet (76.8 metres) in 2015.

One hopes that it won’t take another ten years for Flugtag to land in Sydney again.