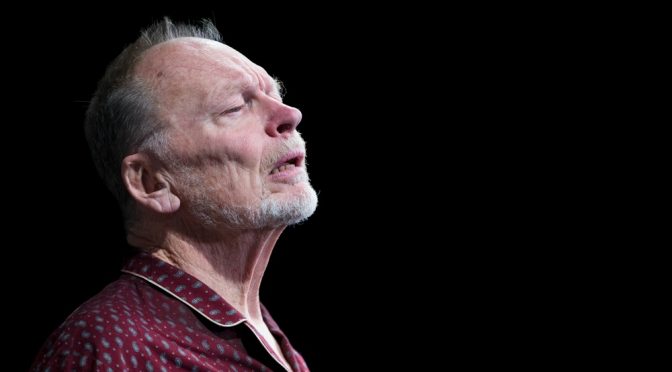 This play isn’t for everyone.  Far from it. If you like your theatre light and easy, don’t give going to this play a second thought.

Where to start in describing French playwright Florian Zeller’s THE FATHER?

Confronting….That’s a start. Actually torrid is a better word, It’s got more of an edge to it. And this play has plenty of edge.

Zeller’s play  uncompromisingly tackles a subject that many of us spend a fair of bit of time avoiding thinking about.

The subject is that last phase of our lives, when age catches up with us and our bodies, or our minds. or both, start to fall apart, crumble, go to pieces…

How are we go to cope?  Will we know what’s going on?  Will other people, our family, our friends, be there for us or will they turn away, because we have become too difficult or too wretched to deal with and it’s too painful? When the end closes in, will there be someone there to hold our hand?!

So many questions…. And the worst part is that in our lives we won’t know the answers till we are there!

In  THE FATHER, the main character, Andre, is at that stage. His brain is going to mush and it is bloody frightening. Nothing is simple any more, even basic human interactions have become problem, as if they were puzzles that had to be worked out.

Zeller writes his play in a kind of eerie, haunting way. The best way to put it is that the actions in the play come from inside his head. Events lurch back, forth and sideways. We are never sure as to what events actually do take place or are simply in Andre’s head. In a sense, we are become as confused and frightened as Andre is.

Damien Ryan’s debut production for the Sydney Theatre Company is taut,fast paced and impressive.  Production elements that stand out are the intermittent use of blackouts, symbolic of Andre’s fractured consciousness, the dark soundscape, and Alicia Clements set, to begin with, detailed in its laying out of  Andre’s Paris apartment and then, by the end, almost stripped bare.

As Andre, John Bell gives a masterly performance. Anita Hegh is a strong presence as his sophisticated,   very concerned daughter, Anne. Marco Chippi plays her sensitive husband, Pierre. Rounding out the cast are Glenn Hazeldine as a menacing, anonymous male figure, Natasha Herbert as an anonymous female, and Faustina Agolley plays a nurse/carer who finds Andre’s behaviour hard to deal with.

The darkness of ageing and disability is made very visible in Zeller’s compelling drama.