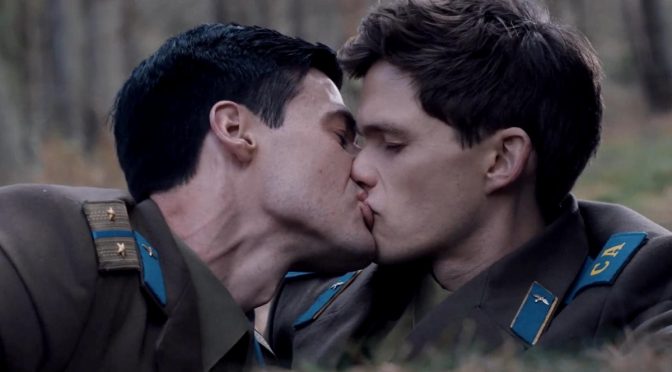 The recent invasion and continuing war in Ukraine by Russia gives FIREBIRD an added urgency.

Based on a true story, FIREBIRD is a passionate romance set against the backdrop of an Air Force base in occupied Estonia during late 1970s Soviet Communist rule.

The Cold War rages, Capitalists are the enemy, and as far as the KGB are concerned there should be no LGBT. Especially in the military.

Their top gun can shoot the shit out of any NATO fly boy, but any hint of homosexuality will have him grounded faster than you can say Putin’s a dipstick.

The dashing pilot, Roman, and his charming young subaltern, Sergey, must keep their burgeoning romance a secret, concealment to the extent that the pilot marries and procreates, while stealing whatever spare time they can to be together.

After Sergey’s discharge from the military, he pursues an acting career which Roman follows from afar, finally reconnecting while on furlough.

Co written and starring Tom Prior, FIREBIRD calls out a regime that discriminates against sexuality, diminishes feelings to the furtive, passion to the fringes and love to the margins.

A special one night only screening of FIREBIRD is to be held on Tuesday, May 17 at 7pm at Dendy Newtown in commemoration of International Day Against Homophobia, Biphobia, Interphobia & Transphobia. This special day celebrates LGBTQIA+ people globally and raises awareness for the work still needed to combat discrimination.

Dendy is also proud to announce we have partnered with the Defence Lesbian, Gay, Bisexual, Transgender, and Intersex Information Service to offer tickets to the Firebird screening to their members at concession prices. DEFGLIS is a non-partisan volunteer charity that supports LGBTQIA+ serving members, ex-service members, and veterans of the Australian Defence Force and their families.


Ticket sales for Dendy Newtown’s one night only screening of Firebird can be found here https://www.dendy.com.au/events/firebird-one-night-only