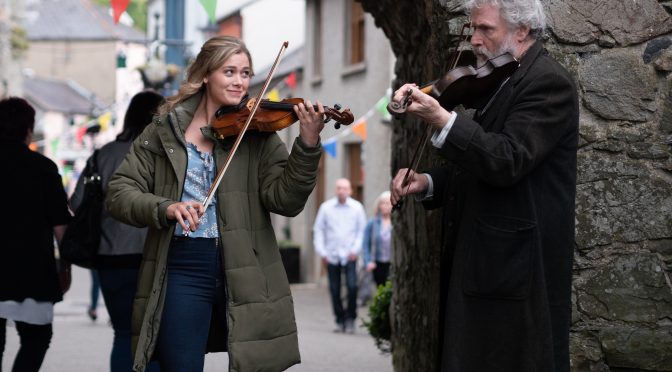 Swollen with sentiment and tugging at heart strings, FINDING YOU should sink under schmaltz, but thanks to Rose Reid’s charming lead performance, equally charming supporting work from a bunch of seasoned performers, a gorgeous location and some fine foot tapping fiddle playing, it’s a guilty pleasure.

Reid plays Finley Sinclair, a New York violinist who travels to an Irish coastal village to begin a semester studying abroad. At the B&B run by her host family she encounters the gregarious Hollywood heartthrob movie star Beckett Rush, played by the impossibly named, Jedidiah Goodacre, who is there to film another installment of his medieval fantasy-adventure franchise.

As romance sparks between the unlikely pair, both are engulfed in a conflagration of self discovery and transformation, Finley with her music, Beckett with his movie career.

In addition to these fresh-faced newcomers, the filmmakers have assembled a group of experienced players that includes Tom Everett Scott as Beckett’s father Montgomery, Patrick Bergin as whisky sodden street musician Seamus, a fiddler on the proof, and the incomparable Vanessa Redgrave as Cathleen Sweeney, a local widow with a powerful secret.

And there’s a scene-stealing turn from Saoirse-Monica Jackson as Emma, daughter of the B&B owners and Beckett’s biggest fan, dropping the sarcasm that has made her character on the Netflix series “Derry Girls” a fan favourite for a sunnier, goofier worldview.

Music plays a major part of the narrative and composers Timothy Williams and Kieran Kiely come up with delightful compositions that stay true to traditional but tune into the contemporary.