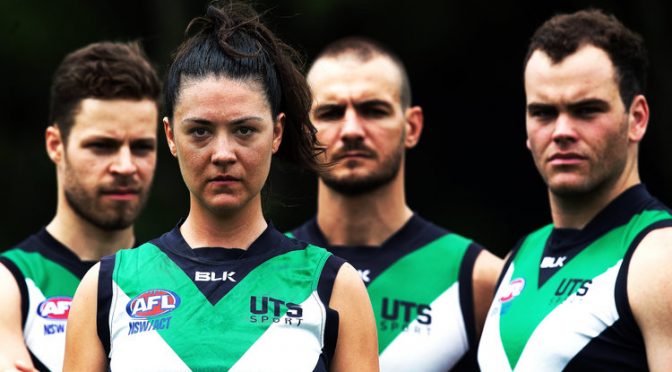 What if a woman was drafted in the men’s AFL?

This is the provocative question at the heart of Jane e Thompson’s play FIERCE which tracks the career of Suzie Flack, an extraordinarily talented Australian Rules Football player who achieves her lifelong dream of being drafted to play alongside her male counterparts in the AFL. This raw but imaginative play explores the impact of this success on Flack and on her family, her relationships, her team and the sport as a whole.

The Guide had the opportunity to ask some questions of Lauren Richardson who plays Suzie.

SAG:            So were you fierce before you started work on the role?  Is that drew you into the project or have you had to learn fierceness in some way?

LAUREN:   I don’t think I would have described myself as Fierce before starting this role. I don’t think women are encouraged socially or culturally to take up space, stand their ground, or be heard fully without apology.

So it has definitely been a learning process. Finding the character’s physicality really helped, the ease with which she takes up space. And training and getting physically really fit and strong makes you feel like a bad ass too so that helps.

SAG:            I gather it’s been a very physically demanding rehearsal period with boxing and AFL included, what new skills have you been working on?
LAUREN:    Yes, boxing has been the main one as we see Suzie boxing in the play, so I thought I better work out what I’m doing. I’ve got a brilliant coach and to my own surprise I’ve fallen completely in love with it.  Who knows maybe next I’ll be getting in the ring?

We also train together as a cast at Spectrum Fitness who sponsor us and absolutely flog us in our sessions. It’s been great bonding for us because nothing builds camaraderie quicker that sweating it up and suffering through a tough session. Then the boys and I usually go for a kick before rehearsals.

SAG:             Your character must be extremely emotionally resilient too, where does that strength in her come from?
LAUREN:     The biggest influence in Suzie’s life is her Dad. He was once an accomplished footballer himself so footy is in her blood and it was her Dad that first taught her to kick out in the backyard at 3 years old. So Suzie’s love of the game is one of the ways her connection with her Father manifests.

But her single mindedness to achieve her dream, has meant her life is all about training and playing and not much else. So the way she interacts with others and the world more broadly beyond football has definitely been compromised. Despite everything she goes through she never gives up fighting and that trait most definitely comes from her Dad.

SAG:          The Old Fitz is a pretty intimate venue if male aggression is disconcerting should the front rows be avoided?  How full on is it?
LAUREN:  Front row is great! Up close to all the action. The lovely thing about the play is there’s wonderful contrast, so there are scenes that are physically dynamic, violent or fast. But then also more quiet, intimate, still moments so the audience will get the chance to breathe.

But however they feel, we want the audience to experience some of the passion and thrill you get at the footy so I hope we manage to excite them. We very much intend to!

That sounds like front rows and a beer for me.  Best wishes for a successful season and I am really looking forward to the show.