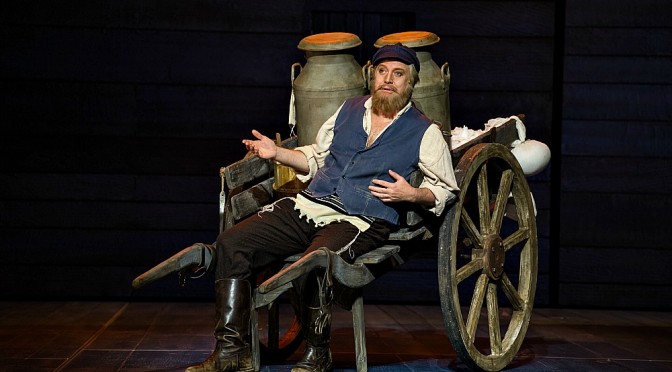 The early to mid-1960s was a big time for musicals. West Side Story, Bye Bye Birdie, Mary Poppins, and The Sound of Music, just to name a few became instant hits both on stage and screen.

Making its debut in Broadway in 1964 was a very different kind of musical named FIDDLER ON THE ROOF.

From the beginning, no one had wanted to adapt such a story and were worried that it would be “too Jewish” to attract a mainstream audience. Against all the odds, this musical became one of the successful and popular musicals in history, the first musical ever to exceed 3,000 performances and one of the longest running Broadway shows in history. It’s timeless story has made it a classic.

Coming to The Princess Theatre in Melbourne for a limited season, FIDDLER ON THE ROOF stars Anthony Warlow as Tevye, a poor Jewish milkman and family man, a father of five daughters, who tries to maintain his religious and cultural traditions at the dawn of the twentieth century in Imperial Russia.

Throughout his ‘journey’ he struggles to cope with the actions of his three older daughters, who wish to marry for love and break with tradition, as well as dealing with the constant  fear, along with the rest of the Jewish community, of being evicted from their village.

Anthony Warlow vividly brings Tevye to life on stage through song, dance and good humour and nails the musical numbers, especially Tradition and If I Were a Rich Man.

His wife Golde played by Sigrid Thornton, delivers a wonderful performance despite being relatively new to musical theatre.

Supporting cast members such as Mark Mitchell who plays the local butcher Lazar Wolf, and Nicki Wendt as the Yente the Matchmaker provided the perfect comic relief whilst also moving the story forward.

Highly recommended, FIDDLER ON THE ROOF is playing for a limited time at the Princess Theatre in Melbourne, until 27th February. The musical then moves up to Sydney playing the Capitol Theatre in Sydney from the 24th March till the 24th April.