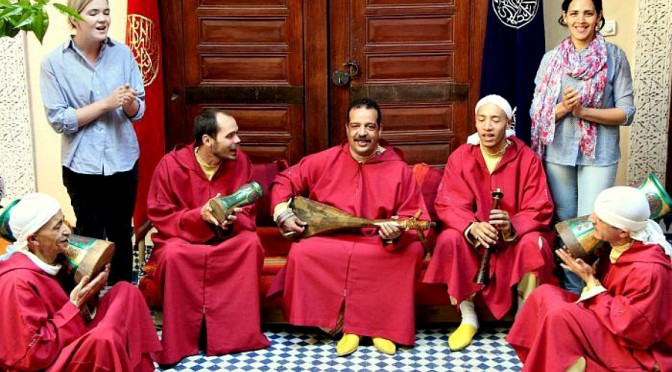 Fez Hamadcha is group of musicians from Morocco, and is part of the 17th-century Hamdouchia Sufi Brotherhood. The group brought the transcendental sounds and ritualistic dance of the mystical Sufi music of Morocco and its ancient culture to the opening night of the Sydney Festival. For an added touch of quirkiness they performed at the Grand Lodge at the Sydney Masonic Centre.

The event was sold out but for some unfathomable reason the audience was made to queue for half an hour before the doors were opened. It was a shamble and Sydney Festival must improve their treatment of paying customers.

Led by Sufi master Abderrahim Amrani Marrakchi, the Hamadcha uses traditional instruments, percussion and chanting to create rhythmic and hypnotic melodies as its members’ progress towards a frenetic state of ecstatic trance and the calling up of ancient djinns.

Along with the Gnawa and the Assawa, the Hamadcha are one of the three most important so-called popular Sufi brotherhoods in Morocco. The Hamadcha brotherhood was founded by Saint Sidi Ali Ben Hamdouch in the 17th century, and is famed for the originality of its repertoire, its spellbinding dances, and the trance-therapy skills of its members.

A musician and a Sufi master, Abderrahim Amrani Marrakchi is one of the last group leaders – “moqaddem” – of the Hamadcha brotherhood and is greatly valued for his emotive singing and his great musical skills.

Abderrahim Amrani Marrakchi is concerned about the preservation of the Hamadcha’s heritage, which is endangered by the modernization of Morocco, and he devotes a large amount of his time to training children and performing in music festivals, often those specialising in traditional and sacred music.

The group walked into the hall from the rear chanting and accompanied by a beating drum, dressed spectacularly in long red robes with cream embroidery. The chanting continued as they took the stage and gradually wailing voices soared over the mesmerising rhythms. A lone female voice added another dimension to the wailing and further complexity with some ululating. The trance like rhythms built steadily to a stunning crescendo.

The long second piece featured a simple but effective stringed instrument, incense burning, stomping and wailing. The dancer had changed into a stunning blue dress and energetically performed a dance employing rhythmic head tossing. The dance was truly dizzying as she briefly collapsed at the end of the dance before quickly regaining her composure and re-joining the group.

The final two songs included call and response singing, some great rhythms from an assortment of drums, exotic melodies from a reed instrument and a couple of massively long brass horns. It turned into a bit of a party at the end, with the audience dancing and clapping along, which to western sensibilities is a little ironic considering the strong religious influences in the songs.

Fez Hamadcha exotically brought the sounds of Morocco and the desert to the opening night of the Sydney Festival.

One thought on “Fez Hamadcha”