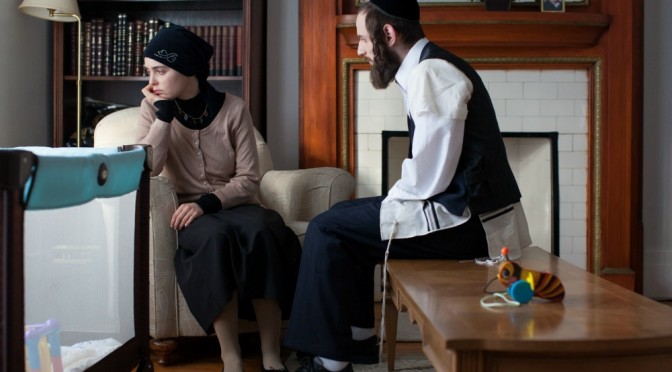 Now showing for a limited season in Melbourne at the Lido Cinema is the critically acclaimed picture FELIX AND MEIRA.

Directed by Maxime Girouxandin expressed in Yiddish, French and English, this film follows the story of an unconventional romance between two people who live vastly different realities though they live in the same neighbourhood.

We have Meira, played by Hadas Yaron, a young Hasidic Jewish wife and mother, hemmed in by her husband’s  traditions and beliefs, and Félix, played by Martin Dubreuil, a carefree hipster mourning the recent death of his estranged wealthy father.

Set against the dull grey wintry backdrop in present day Montreal Canada, Meira is torn between desperately wanting to break free of her strict tradition and give it all up for Felix who yearns for her love and  companionship. Slowly over time they build a secret relationship, much to the consternation of Meira’s archly conservative husband.

This fine film  was included in the list of Canada’s Top Ten  feature films of  the year in 2014.

Although it did not receive any Oscar nominations, it was chosen as the Canadian entry for the Best Foreign Language Film at the 88th Academy Awards.

Highly recommended, FELIX AND MEIRA is a genuinely heart warming, touching story. The film is now showing at for a limited season at Lido Cinema, 675 Glenferrie Street, Hawthorn.