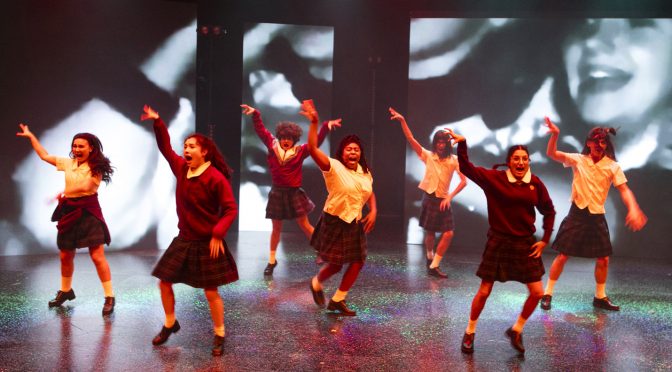 The show was a big hit for Belvoir Street and the Company has brought it back for a return season with it this time playing at the Seymour Centre. It is again bringing in good audiences.

Where’s the appeal? What’s making this such a popular show?! FANGIRLS  has a great energy. The show is about a group of teenage girls, the fangirls of the title, who go nuts over a boy band called One Connection (a play on the famous boy band, One Direction) and its lead singer Harry (the lead singer of One Direction was Harry Styles). The energy that these girls generate in their fandom is electric, bringing to mind ‘So Young’, the great song by Joe Camilleri and his Falcons.

Edna, the leader of the teenage ‘gang’, finds out that One Connection is going to tour Australia and she and her friends will do anything possible to get tickets to the show, somehow get a meeting with the legendary star, and then hopefully abscond with him.

Yve Blake, in a Ted Talk, accurately described her show as, “appearing to make fun of these girls but actually it smuggles them into your heart”. It does more than smuggle, it actually turns one’s head right around. For so long, teenage girls and their crushes have been the subject of much derision. Blake’s musical, there are heaps of good songs, celebrates these girls, their vitality, and their imagination.

Led by Karis Oka as Edna and the ever reliable Sharon Millerchip as her mother, the cast perform brilliantly. Production values, in all areas, are exceptional.

FANGIRLS plays in Sydney at the York Theatre at the Seymour Centre until Saturday 20th February, 2021 and then goes on tour, like any good rock band, to Adelaide, Wollongong and Canberra. Fitting the occasion I even bought a T Shirt from the merchandise store in the foyer, commemorating One Connection’s tour.