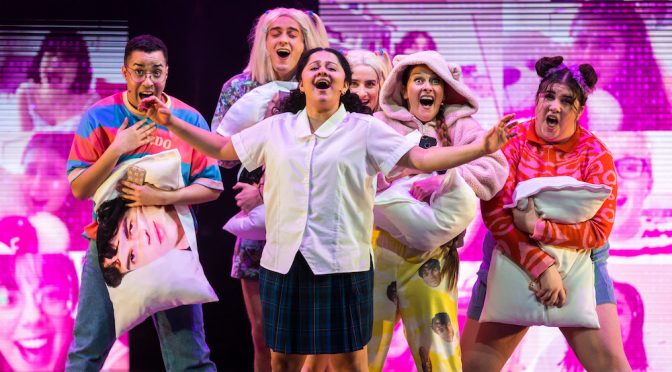 A production by Belvoir Street Theatre, the Queensland Theatre Company in association with the Brisbane Festival and the Australian Theatre for Young People, Australian playwright  FANGIRLS premiered at the Billie Brown Theatre in Brisbane back in September 2019. The show was a big hit.

Just one month later the show opened at Belvoir Street Theatre where it was equally successful.

In February 2021 Belvoir Street Theatre brought the play back for a season at the Seymour Centre with some cast changes.

I have seen the play in both its previous Sydney incarnations. Now Belvoir Street Theatre has brought FANGIRLS back, this time at the prestigious Sydney Opera House with great seating capacity, a more expansive stage area and greater technical possibilities.

FANGIRLS is about a group of teenage girls, the fangirls of the title, who go crazy over the biggest boyband in the  world called One Connection (a play on the famous boy band, One Direction) and its lead singer Harry (the lead singer of One Direction was Harry Styles).

Edna, the leader of the teenage the Fangirls group, finds out that One Connection is going to tour Australia, and will be performing in her hometown. Now is her opportunity to see Harry, maybe even meet him,  and not just write him in her latest fan fiction/fantasy piece.

Straight away, she is on a mission to get tickets. She asks her working class mum, a nurse, Caroline but unsurprisingly she says that she can’t afford it. Edna’s next attempt involves asking her good friend Jules, who has a very wealthy mother, if she could  purchase three tickets, one for Jules, one for their mutual friend Brianna, and one for her.

At first Jules’s mother agrees to the three ticket deal but she changes her mind and only purchases two tickets. Jules decides to give the second ticket to Brianna with Edna missing out. Edna has other plans…

There are of-course some cast changes however Paige Rattray is still the director and the play still holds up really well.

For this latest production there are, of-course, some cast changes. Thankfully Paige Rattray remains the director and her direction is assured. She wins good performances from her cast and the driving rhythm of the music is hypnotic.

In the principal roles – Manali Datar is excellent as Edna reprising the role originally played by the playwright. Milo Hartill plays the domineering Jule who is obsessed with trying to find a boyfriend. Tonieka Del Rosario plays Brianna, Edna’s nerdy, awkward Brianna, Danielle Barnes is excellent as Edna’s mum Caroline.

Blake Appleqvist is excellent as the heartthrob lead singer of One Direction Harry. Amongst the  fans Jesse Dutlow is excellent as Saltypringl, Edna’s best cyberspace friend. Mel O’Brien is great as fan Lily who radiated sweetness until she is angry and with a voice that hits the high notes  like Mariah Carey. The supporting cast are all good.

FANGIRLS Is a good example of when magic realism works. And what is magical about  FANGIRLS is how it authentically takes us into this world which is not to be dismissed and has it own structure, sharp intelligence and plenty of heart.