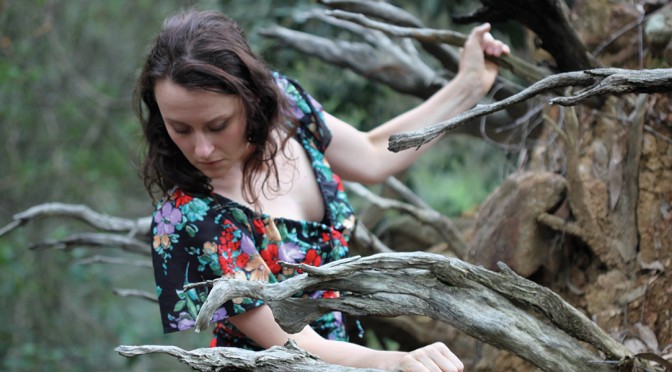 FALLING WOMAN is an interdisciplinary work, a combination of physical theatre, and immersive video. It is a surreal fairy tale or perhaps a dark dream with the falling woman dragging her three legged chair through a bucolic Australian landscape. The tormented Falling Woman (Alice Osborne) comes upon The Witness (Regina Heilman); a mysterious stranger in gold shoes. For audience members, the Witness may be Mother, individual or societal Conscience or some other superior being or mind.

The work was created by Halcyon Macleod and theatre maker Alice Osborne. The acting and movement is beautiful and the theme intelligent. The falling woman’s fight for survival is set against video artist Sam James’ entrancing landscapes of rural NSW. Appropriately, the soundtrack performed live includes an instrument made from a discarded chair. Phil Downing (composer and sound designer) meets the challenge of this work and sustains the difficult journey.

The Falling woman is faced with obstacles which she attacks in a space where there appear to be no rules. The audience is forced to part and shuffle into tight spaces as she pushes through, almost oblivious to the affect she is having on those around. We are told that she has taken strong sleeping pills.

With the clash between the Falling Woman and the Witness, inevitably one of them has to be destroyed.

This is a beautiful yet harrowing work with at times a little too much going on.