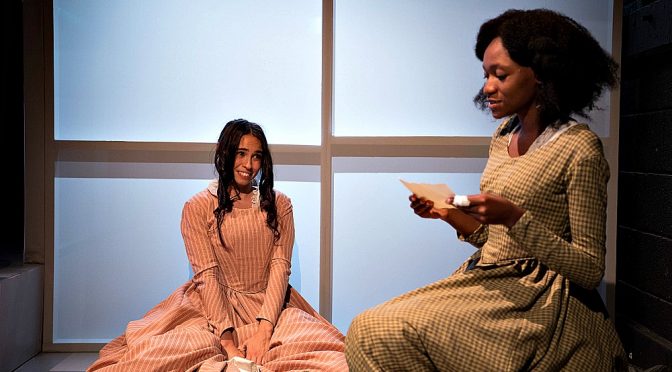 Lyrical and powerful this play is a fascinating insight into a little known piece of British/Australian history.

Seanna van Helton’s FALLEN is a stage adaptation of historian Jenny Hartley’s’ novel, THE  HOUSE OF FALLEN WOMEN (2009). Penny Harpham directs this current production which has been co-produced by Sport for Jove and Melbourne’s’ She Said Theatre.

The setting is London in the 1840s. The location is Urania Cottage in London. The cottage was founded by legendary author Charles Dickens with wealthy banking heiress Angela Burdett-Coutts. It was established as a reformatory for fallen women as an alternative to the workhouses and prison.

Two conditions were imposed on women accepted into Urania House – they could never speak about their past, except to Dickens (who used some of their  stories in his writing),  and when their training was complete they were not allowed to go back to London but had to move to one of the colonies, and either become a domestic servant or marry one of the settlers.

The atmosphere was like a boarding school with strict rules.The women all want to escape the rigid rules and extreme monitoring-there is no privacy. Dresses are severely plain with aprons as required.

Hartley’s story follows the journeys of eight fictional women from the House. Penny Harpham directs well and the cast perform strongly. Lucy Goleby plays the matron of the house, something of an ice queen, stern and determined. She has an inner world though, she too is is lonely and longs for love. Megan Holloway, Chantelle Jamieson, Abbie-Lee Lewis, Moreblessing Maturure, Rebecca Montalti and Eloise Winestock play the other six women.

A feature of Owen Phillips’ set design was its flexibility. In the first half, the set comprised a dormitory bedroom area, a matron’s office and a general living area. After interval,the piano had been shifted, the beds removed, and there was now a large dining room area and kitchen. There was still a matron’s’ office area, and also an outdoor garden space.

Raya Slavin’s’ soundscape included passionate piano music (inspired by female composers of the period) as well as popular ballads of the era. There was also the unnerving ticking of a metronome.

FALLEN was a play with plenty of contemporary relevance with its exploration of issues of self-worth and identity, patriarchal society, and issues around sexual freedom. This was fascinating, thought provoking theatre. Running time – just under 150 minutes including one interval.

FALLEN is playing the Reginald Theatre at the Seymour Centre until 22nd April.