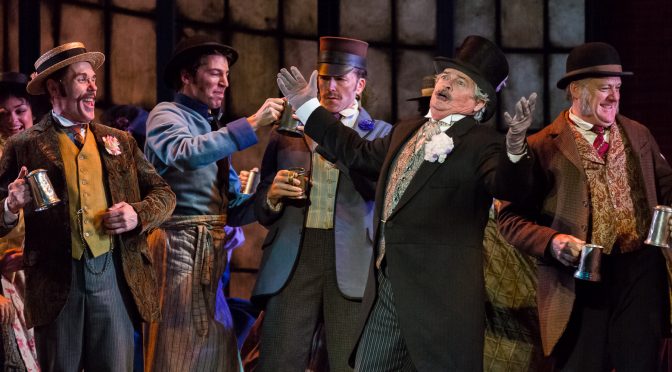 As always, Melbourne is blessed to have its own West End. At one side of the city there’s Aladdin showing at Her Majesty’s Theatre. Now showing at The Regent Theatre for a limited time is My Fair Lady.

Directed by theatre legend and the original Eliza Doolittle, Dame Julie Andrews, MY FAIR LADY tells the story of Eliza Doolittle, a young Cockney flower girl who takes speech lessons from professor Henry Higgins, a phonetician, so that she may pass as a lady, during the Edwardian days of London. It was all because of a bet with fellow phonetics Professor Hugh Pickering. The show is based on the George Bernard Shaw play Pygmalion, with lyrics by Alan Jay Lerner and music by Frederick Loewe.

The show became a sensation during its original 1956 season, setting the record for the longest run of any show (2,281 performances) on Broadway up to that time. It has since become one of the most successful and popular musicals in history. It’s a story about love, comedy; drama and social class which has made it not only a great show, but has also seen it frequently being described as “the perfect musical”.

The Australian production so far has sold more tickets than any other in the history of the Sydney Opera House during its season last year, the 60th anniversary of the production. It’s been so successful that extra performances have been organised this year in late August and early September at the Capitol Theatre.

Not surprisingly, there was not an empty seat left in the 2000 seat capacity Regent Theatre when I attended on opening night. Members of the original production posed for photos on the red carpet outside prior to the show. Some of original props and costumes were also on display.

Bringing the beloved musical back to the stage was never going to be easy but the show did not disappoint. From start to finish the whole production, from the sets to the choreography and the singing and dancing along with classic songs such as I Could Have Danced All Night, Get Me to the Church on Time, I’ve Grown Accustomed to Her Face and The Rain in Spain, were spectacular.

Anna O’Byrne as Elizabeth Doolittle was mesmerising. From the humble flower girl to a lady of class and sophistication O’Byrne nailed the Cockney accent. Her beautiful singing combined with her fine comic timing made her an excellent Eliza.

Reg Livermoore’s performance as Alfred P. Doolittle, Eliza’s drunken dustman father, was a crowd pleaser, with a highlight being his rendition of Get Me to the Church on Time.

This was an extremely entertaining production. Be sure to dress up and look your best for MY FAIR LADY at The Regent Theatre on Collins Street.

The production returns to Sydney at the Capitol Theatre from 24th August to 10th September.