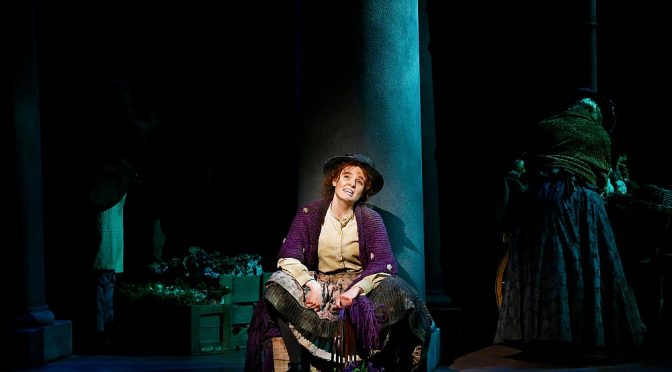 I didn’t get to see last year’s Diamond Jubilee Anniversary production of MY FAIR LADY, directed by Dame Julie Andrews, put on jointly by Opera Australia and the Gordon Frost Organisation, which played the Sydney Opera House.The production was widely acclaimed and the entire season was  a sell out.

A return season of the production has just opened at the Capitol Theatre. Expectations were high and they were more than met with this wonderful production which will no doubt acquire a whole set of new fans as well as a legion of theatregoers who saw the show last year and have returned to experience the magic one more time.

We enter the theatre to see the stage curtain depicting a sweeping, panoramic view of London town – a glorious chocolate box view with a  ribbon in the middle. The ribbon is untied with the opening of the curtain and for the next three hours these entertainers put on a great show.

I don’t say this lightly, this MY FAIR LADY is the  complete  package – the singing, the dancing, the portrayals, and the vibrancy of the performers from the wonderful leads, the luminous Anna O’Byrne and Charles Edwards to some great Australian stage veterans such as Robyn Nevin  and Reg Livermore  to a wonderful, vibrant ensemble.

In a show of highlights, the constant trysting between the priggish, chauvinistic Professor Higgins and the feisty Eliza, reminiscent, in its own way, of Petruchio and Kate in Shakespeare’s wonderful Taming Of the Shrew, stood  out most for me. This was a classic battle of wills, played out to the show’s very well realised climatic scene.

Production values were outstanding. The show was a visual as well as an aural feast with the stunning costumes and sets. The glorious ballroom scene with the chandeliers ‘dropping down’ from above took one’s breath away.

3 thoughts on “MY FAIR LADY @ THE CAPITOL THEATRE”