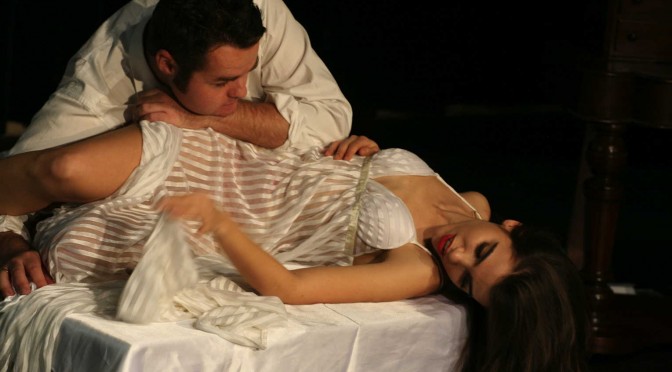 This adaptation  of CAMILLE is re-imagined for the modern stage. Set in the 1840s this unforgettable classic bourgeois drama of the famous courtesan CAMILLE has comedic twists and enticing turns of plot, and an excellent music soundtrack. Beautiful Marguerite Gautier at the age of fifteen, her Marquis employer seduced her and becoming pregnant, she decides on the courtesan life as CAMILLE.

Unaware that she is in the initial stage of consumption (tuberculosis) she meets the son of the Marquis, Armand Duval, and the two fall desperately and deeply in love. This Marguerite Gautier has a heart and an interesting feminist attitude, to her life as a prostitute, and we are shown the hard business side of prostitution and the brothel’s constant demands. In this inhospitable society with the tragedy of class structure, enforcing social and economic issues; but there is the fascination here, because this woman makes terrible choices.

Marguerite’s (Paloma Alma) role as a mother with her bastard son Jean-Paul is highlighted. Further, Jean-Paul is actually the Marquis’ son, and half-brother to Armand Duval (Robert Roworth).

The play has adult themes, there is no nudity but there are homosexual lovers for both Marguerite and Armand. Running time is over two hours including one interval.

CAMILLE is playing at the Star of the Sea Theatre, at Stella Maris College, corner of Iluka and Collingwood Streets, Manly until Saturday 25th July,

There are two remaining performances of this production, this Friday and Saturday night at 7.30pm.

Prudence, a woman who has chosen her life, and makes her money striking bargains. (Imogen French)

Armand, doomed as his life entwines with Marguerite. (Robert Roworth)

Clemence, works for Prudence and is always accommodating. (Rhianne Evelyn-Ross)

The Count from Sweden, an honest man adrift. (Matthew Grego)

The Marquis, from a country estate in France, knows his obligations to his land and blood. (Peter Hayes)

Janine, the maid from the country who would be Marguerite. (Katharine Richardson)

Yvette, sister to Marie, and doing her best for her family. (Katrina Papadopoulos)