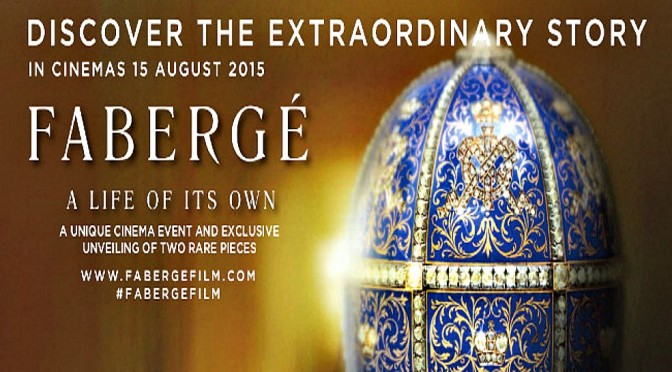 This is a fascinating, at times heartbreaking documentary about The House of Faberge, one of the most prestigious names in ultimate luxury. The film covers one hundred and fifty years of romance, tumultuous history, artistic development and international commercial expansion and development.

Founder Carl Peter Fabergé attended to the demands of the tastes of the Russian Imperial family. FABERGE: A LIFE OF ITS OWN charts the journey of this inimitable Russian jeweller, celebrating his extraordinary talent and craftsmanship. His name and contributions remain a source of admiration and reverence in an opulent, now lost world.

The famous jeweller’s family history is interwoven with the detailed history of some of the specific artefacts. An example is the 1891 egg that commemorates the then Tsarevitch Nicholas’ Asian travels which led to Asian design influences and very enthusiastic Asian collecting.

Shot in locations across Russia, Europe and USA, including the collection of Her Majesty Queen Elizabeth II, there are spectacular streetscape scenes of Moscow and St. Petersburg. The cinematography is stunning. The artefacts such as the peacock and a contemporary emerald necklace are filmed in lavish, loving closeup so one can admire the detail.

It is also fascinating to see black and white footage from prior to  and during the Russian Revolution. The dysfunctional society is evident: the appalling poverty of the general bulk of the people is contrasted with footage of the glittering court. We see influences of modern art and design and how the Russian Revolution and Great Depression affected the House.

The film begins and ends poignantly with the derelict Faberge dacha. From the encrusted unique, bejewelled Easter eggs of the Romanovs to the 1970s allure of ‘Brut by Faberge’ aftershave, and from the Russian revolution to contemporary glitzy high-power fashion shows in New York and London we see how the Faberge name has survived even through some relatively rocky times.

We learn that at one point in its heyday Faberge’s Russian HQ had over three hundred staff and we see some of today’s top jewellers at work. We are shown, amongst other things, the process of enamelling.

We see watches, trinket boxes, photo frames, cigar boxes, rings, cufflinks, fans, the delightful menagerie of animals and numerous other dazzling items. The extraordinary attention to detailed,exquisite craftsmanship and technique is mentioned throughout.

Two historic new eggs are also shown in the film in an incredible conclusion. Completed in 2015, The Pearl Egg is the newest first ‘Imperial Class’ egg and was created to mark 100 years since the production of the last Imperial Egg for Tsar Nicolas II. Over 3,000 diamond and natural pearls adorn the magnificent object d’art, now held in a private collection.

Serendipitously unearthed by a US scrap metal dealer a few years ago, the recently discovered Third Imperial egg and its extraordinary story are also discussed in the final part of the film .

An enthralling, oh so opulent film full of lavish splendour and beauty.

FABERGE: A LIFE OF ITS OWN screens at selected cinemas as of August 15.