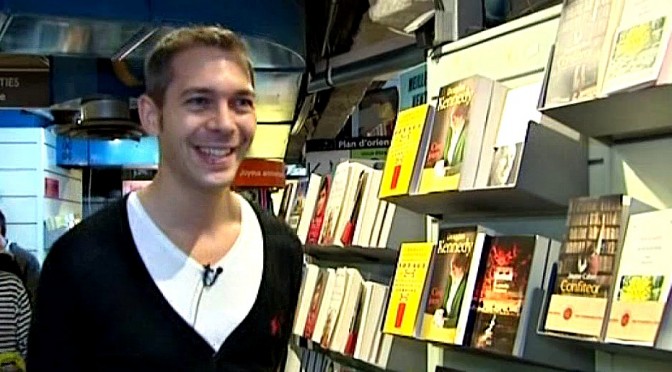 Long titles seem to be de rigeur in publishing these days. We’ve had The One Hundred Year Old Man Who Climbed out the Window and Disappeared.

Now we have THE EXTRAORDINARY JOURNEY OF THE FAKIR WHO GOT TRAPPED IN AN IKEA WARDROBE by Romain Puertolas.

A sensation in France, it is being published here by Vintage in trade paperback.

Like Tabish Khair’s How to Fight Islamist Terror From the Missionary Position,

THE EXTRAORDINARY JOURNEY OF THE FAKIR WHO GOT TRAPPED IN AN IKEA WARDROBE is a compulsively readable hoot about subjects that are far from laughing matters, but as the saying goes, if you don’t laugh you’ll cry, so may as well kick back and cack.

The Fakir of the title is a turbaned trickster with a name that sounds like a-jar-of-rat-stew-oh-gosh or a cat in a bat suit, depending which page you are on, who has travelled from his small Indian village to purchase a bed of nails from an Ikea store in Paris.

Strapped for cash – he has a counterfeit hundred Euro note on a retractable thread, a fraud that ferments a feud with a gypsy taxi driver that runs the length of the novel- the fakir stays in the Ikea store after closing time in a bid to bed down before his return trip to India.

Disturbed and fearing discovery, he secretes himself in a display wardrobe – nar, nar, nar, in which wardrobe lying he is carted off to England on a freight truck fraught with danger.

On board, refugees from Sudan, sardined and seeking illegal immigration to Great Britain.

The truck is busted by the Brits, so it’s out of the closet and into the clink and through the vagaries of bureaucratic application of the Chicago Convention, the fakir and his Sudanese stowaways are sent to Barcelona.

In a sequence to rival Jules Verne – complete with hot air balloon which was pure Hollywood – but in less than eighty days and admittedly covering less ground- the fakir spans Spain, Italy, Libya and boomerangs back to France on a farcical, magical mystery tour that takes in a famous French actresses and high powered publishing poobahs.

Madcap mayhem with Marxist – Brothers and Karl – overtones and packed with characters either with Malaprop or onomatopoeic names, Puertolas’ novel is a picaresque potpouri about asylum seekers taking over the lunacy of border bureaucracy, better living through giving, and the torturous course of true love.

A bed of nails to a bed of roses story, THE EXTRAORDINARY JOURNEY OF THE FAKIR WHO GOT TRAPPED IN AN IKEA WARDROBE is ripe for film adaptation by Wes Anderson. Let’s hope he can talk Sophie Marceau into appearing.