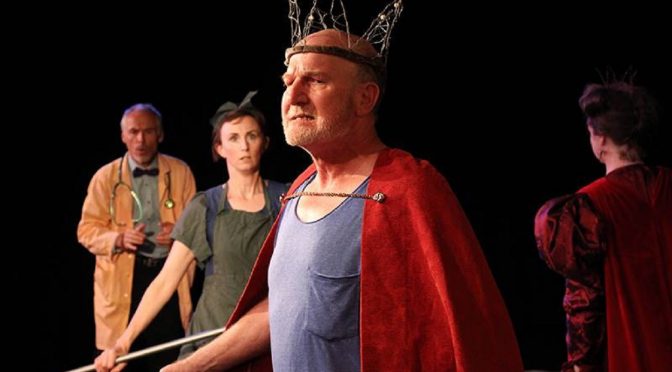 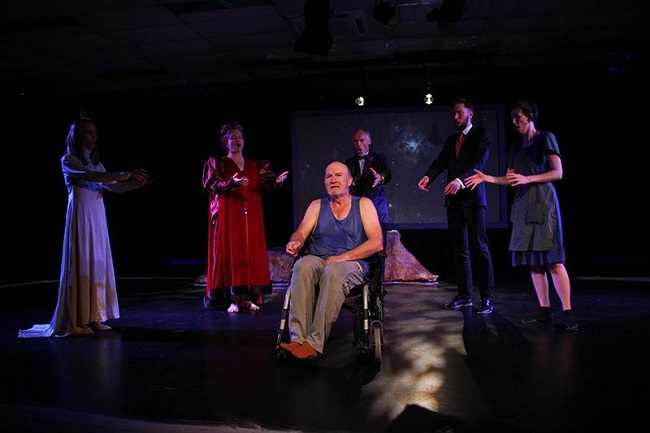 We enter a topsy turvy and shattered world where time is bent , fluid and changeable. King Bérenger the First is dying after an extremely long life. His kingdom is disintegrating . He no longer can head his army, tell the rain to fall, nor the trees to grow. He is dying and there is nothing he can do to prevent it. He has lived from moment to moment but now there is no more time .His first wife, Queen Marguerite , is obsessively keeping track of time. “You will die in 1 hour and 30 minutes!” she informs him. And the doctor agrees. But King Bereneger refuses to listen. He chooses instead to bask in the love of his second wife, Queen Marie. Suddenly there are just “1 hour and 13 minutes left!” .Or is it fifteen ?The clock is ticking… Surrounded by his two wives, his cleaning lady, his doctor and a guard, Bérenger has to learn to accept the inevitable .He struggles and rages against it but to no avail.

The throne room is dirty , the sun no longer rises as it should , the heaters don’t work and there is a mysterious large crack in the wall . All symptoms of the King’s decline. We see how the King’s failing body also represents the health of his country. There are also lyrical references to the universe, stars and constellations .

The play opens frantically with an almost speeded up introduction of the characters , this is contrasted later with the use of some characters being frozen in place and/or the use of slow-motion.

The stage is bordered by a line of sand (which is most important towards the end ). Rocks painted in a rather Impressionist manner act as perhaps a lunar landscape ( ? ) , a beach and as seats .

There is excellent ensemble playing throughout. As King Bereneger , Leof Kingsford-Smith is terrific , we see both his strength and vulnerability in a towering multi faceted performance . Apparently once he ruled over an enormous empire but now not even his own body is subject to his will. At times he is Lear like in his rages against death and nature,  at other times his speeches are soaringly lyrical in an imposing , compelling performance.

Kirsty Jordan plays Queen Marguerite, Berenger’s first wife in a glorious red dress and watch on a long hanging chain that she checks every so often. She is depicted as a somewhat unrelenting firm character who leads the others in guiding the King towards his death.

Clay Crighton gives a splendid performance as Bereneger’s second wife Queen Marie who dearly loves her husband . She wears an exquisite long white gown with a beautiful lace neckline bodice and long sleeves. She is concerned for her husband and at various times is portrayed as weeping and almost Ophelia like but is also strong when trying to help him.

Alison Windsor as the maid/nurse is always bustling around frantically attempting to clean things up .We often see her with a broom or bucket . She represents The People. As the maid she can be pert and banter with her ‘betters’ while as the nurse , she is caring.

Gerry Sont as the harried, concerned Doctor tries to help his patient as much as possible but joins forces with Queen Margerite to warn the king of his inevitable approach of death .

Josef Schneider as the Guard – who also plays the violin – gives a fine, well considered performance .

The ending where the other characters slip away one by one and Marguerite guides the King , is haunting and lyrical .