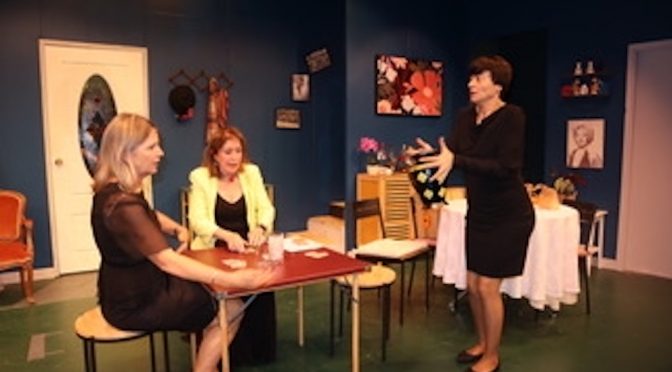 Death puts everything into perspective. When tomorrow isn’t promised, suddenly you’re looking over all your yesterdays wondering where they all went and how come you didn’t do all those things you planned? Mary won’t let her friends live with the “what ifs” she had, so she’s sending a message from beyond the grave whether they’re ready to hear it or not.

For the last 30 years Connie (Jennifer Birdsall) has been hosting her friends’ weekly bridge night with Leona (Meili Bookluck), Millie (Narelle Jaeger), and Mary. But now Mary’s passed and this’ll be their first night without the fourth musketeer. That is, until Millie comes swanning through the door with Mary’s ashes tucked under her arm, freshly collected from the funeral home. While Mary’s attendance was unexpected, there are even more surprises planned for the evening with Mary organising a range of deliveries as a final hurrah for her very best friends.

Paul Elliott’s script is warm and wholesome with a Southern twang that recalls the emotional vulnerability of Steel Magnolias or the snippy old friendships of Always a Bridesmaid. While the message of embracing life before it’s too late is aimed at the older women in the friendship circle, a similar message comes through for younger generations in the character of Connie’s daughter Rachel (Ella Humphreys) who is stood up by classmate Bobby (Aaron Okey) and swears off dating forever, an indication of her all-or-nothing approach to the uncomfortable parts of life. Elliott’s script says, whatever your age, jump, say yes, start really living.

Director Tom Richards leaned into the silly tone and ridiculous circumstances of the plot with hammy and exaggerated characterisations that amplified the comedy and solidified these’s women’s long-standing friendship. Connie was a typical mother figure attempting to balance having her own life with the high dramatics of her daughter’s but she also juggled the see-saw of the sarcastic and cutting Leona and the space cadet Millie. For every joke that Leona turned into a dig, there were two that Millie needed explained. Add to this already chaotic combination a cremated body, grief, booze, and a police raid turned surprise stripper and Connie’s stagnating life seemed on the up!

The set design, also by Richards, was a simple but detailed depiction of Connie and Rachel’s living room but the lighting design by James Bruce and sound design by Gary Clark transformed the space into a dance party with Bobby’s contracted arrival and subsequent performance. While this was the liveliest scene in the production, and it certainly livened up the audience, the extended conflict between Rachel and Bobby due to Rachel’s disapproval of his stripping job felt out-of-place, a tad out-dated, and unnecessary in the second half. The Rachel/Bobby relationship was the weakest part of Elliott’s script for how frequently the characters appeared more as plot filler to the larger story of Connie, Leona, Millie, and Mary but it’s hard to begrudge Bobby’s presence when his recollections of Mary bulked out the emotional thrust of the entire production.

Okey as the soft-hearted and compassionate Bobby was a stand-out performance for his genuine care and agreeableness. Similarly, Jaeger’s performance as the foolish and naive friend in the group was convincing alongside her deep love for her friends, including Mary. Her characterisation provided ample opportunity for Jaeger’s perfect comic timing in one-liners and misunderstandings which drew the majority of laughs from the audience. Despite frequent wobbles in delivery amongst the cast and some dubious scripting on Elliott’s part, the cast had a believable dynamic that expressed their characters’ close history with inside jokes and easy physicality.

If it’s a message you need to receive, EXIT LAUGHING  is the reminder to book those tickets to Italy, pull out the red dress, and get on with living the life you want right now.

Paul Elliott’s EXIT LAUGHING is playing the Arts Theatre Cronulla until 11 June 2022. Performance times are Wednesdays, Fridays & Saturdays at 8pm and Sundays 29 May and 5 June, 2022 at 2pm.

Review by Julia Clark. Her review of EXIT LAUGHING was first published on her blog Night Writes