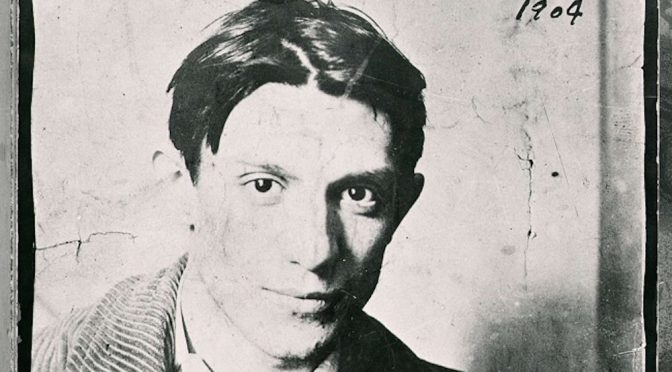 The latest fascinating film from the Exhibition on Screen team is THE YOUNG PICASSO .

YOUNG PICASSO looks at Picasso’s earlier years up until 1907, with the production of the revolutionary Les Demoiselles d’Avignon, Picasso’s childhood , training and influences and how he eventually became one of the world’s most famous artists.

Various museums are visited – we briefly see assorted exhibition displays in Spain, France and MOMA in New York for example – as the camera pans around the room. Several museum directors, curators and other experts talk about Picasso’s life and analySe the numerous works and Picasso’s grandson Olivier Widmaier is featured. Where appropriate the film is in Spanish with English subtitles.

We see fascinating shots of places where Picasso lived (Montemarte in Paris for example) both then and now. The three main cities where the young Picasso lived – Malaga, Barcelona and Paris – are featured as well is footage of matadors, bulls (Picasso strongly identified with the Spanish culture of the bullfight) and Flamenco .

The film looks at the influences on the young Picasso , from Goya, Velasquez , Ingres ,Gaugin and Toulouse-Lautrec to African tribal masks .We learn however that Picasso was always a rebel against staid artistic traditions and constantly experimenting throughout his life. Picasso’s father was also an artist – an art teacher – who at first helped and trained Pablo.

We learn how Pablo from the age of ten started to paint in oils. From 1892-1894 Pablo was enrolled at the secondary school and also at the school of fine arts in La Coluna where his father was his teacher. In 1894 his father removed thirteen-year-old Pablo from regular school so that he could focus on the study of art. In 1895 Picasso began his study of the human figure and his father paid for the live model.( We see examples of Pablo’s work from these years ).

When the family moved to Barcelona Picasso enrolled in the Llotja Art School. Pablo’s early (1897) work Science and Charity is extensively analysed at this point in the film.The training at Llotia was very dry, repetitive and old fashioned but equipped the young Picasso with a tremendous base for future work .

Picasso later moved to Madrid and studied at the illustrious San Fernando Royal Academy of Fine Arts and spent hours at the Prado museum.  At the same time in Barcelona he had his first exhibition in the café The Four Cats that attracted the attention of the older artists Ramon Casas and Santiago Ruisiñol who had been to Paris and described its wonders to him  so Picasso visited Paris with his friend Charles Casagemas before settling in Paris in 1901 .

The death of Casegmas ( Picasso produced a strong, vivid painting of his dead friend who suicided in 1901 ) saw the start of Picasso’s ‘Blue Period’ , roughly 1901- 1904 ( eg his Madeline portrait , The Old Guitarist , and La Vie not forgetting his striking, intense self portrait) which led to his major series of paintings of acrobats and what is known as his ‘ Pink’ or ‘Rose ‘period. ( roughly 1904-1906 ) – eg Family of Saltambiques , and The Two Brothers . We also see some of Picasso’s vibrant female nudes and some of his sculptures, for example the Fool.

A segment is then devoted to the creation and development of Demoiselles D’Avignon , how it revolutionised art and analysis of the influences and inspiration the work had on artists then and now . What made it so different, shocking and challenging and why?

The final ,very brief segment looks at the rest of Picasso’s life and work after 1907 , the development of Cubism etc ( no mention of his work for Diaghilev’s Ballet Russes though) and Guernica , as well as his ceramics, engravings and other oeuvre, the huge legacy of works he presented and how artists are still influenced by him today .

This was a  fascinating , insightful documentary.

YOUNG PICASSO is screening at selected cinemas from August 1 2019