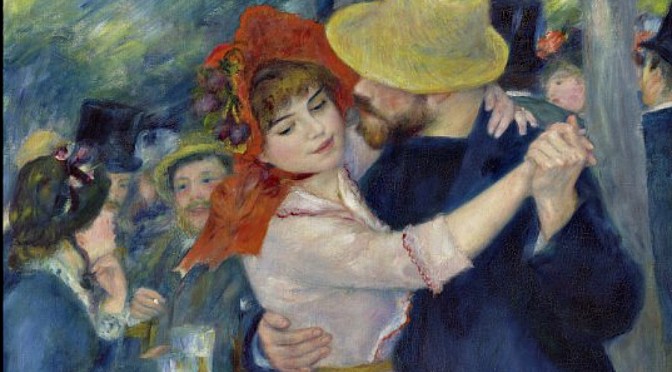 This is a dazzling, gloriously photographed film documenting an amazing exhibtion jointly curated by three major international museums. It looks at the work of the major Impressionists (Monet, Manet ,Cezanne, Degas, Sisley, Renoir, Cassatt, Morisot et al). Who were they behind the public face of their works? What is the story behind their works?How and why exactly did they paint? What is the source of their enduring appeal? What inspired them? All these questions and more are answered in this stunning film.

Part of the broader ‘Exhibition on Screen’ series, THE IMPRESSIONISTS AND THE MAN WHO MADAE THEM is a hugely insightful documentary. The exhibition debuted in Paris’s Musée du Luxembourg last October, is finishing today at  London’s National Gallery and next moves on to the  Philadelphia Museum of Art between this June and September.

Film director Phil Grabsky visits the curators and their teams in each of the museums to obtain insights not only into the paintings and their history but also into the process of putting on an exhibition of this scale.

It is fascinating to see the differences and/or similarities in approach to the hanging and presentation of the exhibition. Which paintings group well together and why?

The film and exhibition concentrate on the man now credited with inventing Impressionism as we know it: 19th century Parisian art dealer and collector Paul Durand-Ruel.

Visionary Durand-Ruel was one of the first modern art dealers to offer support and solo exhibitions to the painters he worked with. His decision to exhibit the works of the Impressionists saved Impressionism from its near demise during a time when it had few prospects.

We hear quotes from Monet and Pisarro extolling Durand-Ruel’s support and how he helped them financially in times of great struggle.

Durand-Ruel was almost single-handedly responsible for financing Monet, Manet, Renoir, Cézanne and more, though he himself often came close to financial ruin. Through his perseverance, the Impressionists were eventually given the praise and attention that they richly deserved.

We see stockroom catalogue books and catalogues of various exhibitions at the Durand-Ruel showroom, hear letters from Durand- Ruel and assorted Impressionists, learn more about the groupings and characters of both Durand -Ruel and various members of the Impressionists.

The historical context of Impressionism is discussed in great detail as is the influence of Turner on some of the members of the group.

In 1886 It was Durand-Ruel’s rather brave decision to exhibit the Impressionists in New York that captivated wealthy Americans, anxious for ‘the new’.  In doing so Durand -Ruel kept Impressionism alive and filled American galleries with their much loved works.

An interesting fact is that in 1889 it was an American gallery that first bought an Impressionist painting rather than a French, English or other European work.

Alongside the curators of the exhibition from all three musuems are an assortment of experts, from across the worlds of art history and criticism, providing insight into Durand-Ruel’s striking and until now relatively little-known impact on the art world. We also hear from two of his descendants. We hear about the Paris art Salons and how hard it was to be accepted and hung and how this affected the group.

Grabsky lets the camera linger lovingly over the paintings,sometimes showing us how they are displayed in context within the exhibition (for example Manet’s poplars, some of Degas’ dancers, some of Renoir’s works) or in extreme closeup detail, brushstroke and texture swirling. The Renoirs absolutely glow. A good addition is the passionate Romantic piano music that accompanies the pictures.

For those of us unable to personally attend exhibitions of this quality, this particular Exhibition On Screen gives art lovers the opportunity to take in  this great exhibition about the much loved Impressionist painters.

ART ON SCREEN: THE IMPRESSIONISTS and the Man behind them is screening at selected cinemas from the 30th May. For more information visit-http://www.sharmillfilms.com.au/?page_id=4007