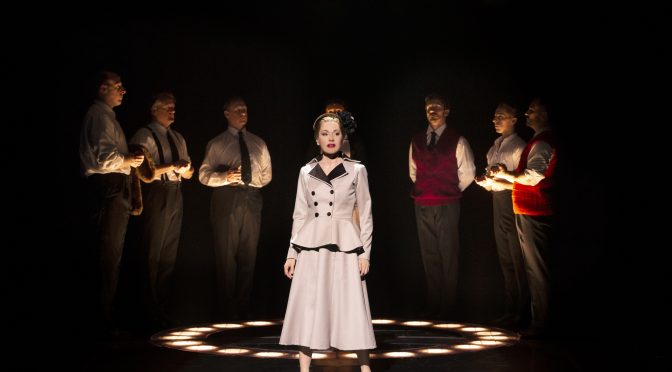 Unusually, it is the second act of the current production of EVITA which sold this show to me.  The history of musical theatre is littered with the corpses of second act fails, but here, a combination of superb acting and a directorial instinct for the achievement of intimacy brings down the final curtain with pathos and that inescapable excitement of having been thoroughly entertained.

This production is a big event as only a grand musical can be.  Banners throughout the city and a front page introduction from the Minister for Tourism and Events in the program and, realistically, if you are reading this you will go and see this production. In the lead up I asked a range of people why and the answers were, unsurprisingly, related to age.  Younger people going because of the star, mid-range to see what the Madonna film is like live and elder citizens because we can sing along with every word: having worn out the Julie Covington record before the invention of a repeat button.  A manifold and challenging set of expectations for a 2 hour and 20 minute revival of a 1978 West End production.

Tina Arena as Eva Peron is the drawcard for many and she throws herself into this role with the professionalism we expect from a star of her calibre and experience.  Arena’s first act stagecraft alone is breathtaking.  There are constant quick changes, wig to shoe.  Ally that with her replete manifestation of ambition and the detail in each of her interactions and you have a character which carries out to the audience.  The failure of the corporeal and the fragility of will in the tragic finale is built on that bedrock of understanding.

In any interpretation of this Tim Rice/ Andrew Lloyd Webber classic, the songs and the staging of the ending are designed for considerable impact.  However, what lifts this production from considerable to mesmeric is the acting.  Arena’s work in Act Two is marvellous to watch and be absorbed by.  Her tone change in that big voice is character and narrative based precision and her physicality is halting rather than sunken and all the more powerful for it.  It’s everything, young or old, that one wants in the climax of a major musical.

And Arena’s work is completely matched by the other principal artists.  Kurt Kansley is a revelation as Che.  Cynical and obsessed with his own agenda, we see the radical animal overtaking the man, the despot-maker to be.  He commands the stage and often twists low with a socialist rage at the excess without losing sight of the woman and her weaknesses.  As Peron, Paulo Szot has the slimy arrogance of the preternaturally imperious gentled with a genuineness in his concern for his wife.  Szot gives us a Peron with love enough to trump political loss.

Vocally, this production is quality plus with a very strong cohesiveness in the orchestra tightly articulated by Musical Director Guy Simpson, particularly in the single instrument introductions and the swell of triumph in the big sequences.  The excellence of the singing is exemplified by Alexis Van Maanen as The Mistress in that one song which carries the emotional impact of Evita’s ruthless rise.  Van Maanen’s injection of childlike innocence rather than knowingness is a stunning interpretation inside a  show stopper scene. 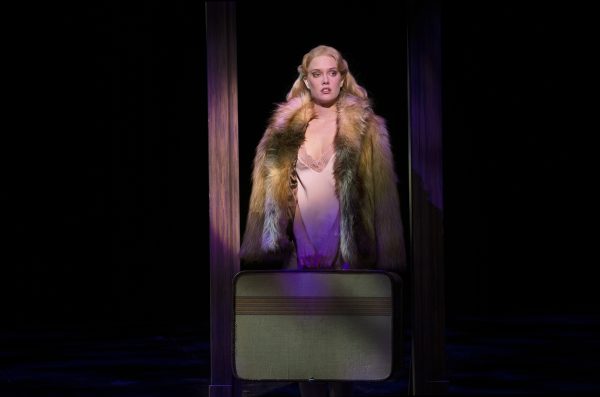 There are many sequences which delight in this production but last night there were disappointing problems with those large ensemble elements in the first act.  The choreography is still there to thrill if you haven’t seen the show before but the detail is sadly lacking.  The minutia that makes the military crisp, in perfect lines not just in time and the bends in the aristocracy to give the visual representation of opposition were broadbrushed.  What did have thematic and narrative carry in Act One was the use of distance on that huge stripped stage.

Put Che upstage between Eva and Peron at their first meeting and you have directorial thinking that resonates with the personal.  Director Hal Prince (Associate Director:  Daniel Kutner, Resident Director: Pip Mushin) often takes Eva away from the crowd and puts her alone on downstage in Act One and this aloneness is solid ground for the intimate and enclosed ballads of the second act when Arena’s presence, her acting and her singing are thrilling to watch and hear.

Intimate lighting and a move to more sepia tones rather than that horribly modern blue assists in the overall effect of Act Two but I had been craving period hues long before the candles scene and, sadly, less than stellar dome work pervaded the show I saw.  Visually there is a great deal of depth in the Video Design (Duncan McLean).  Pre www, in the late 1970s when I, inspired by the original album, spent hours at the library pouring over books about Eva Peron no such real life imagery was available.  Its use in this production informs without didactism and serves to unify those who remember and those who are intrigued by the narrative.

EVITA is a capital E event and a night at the theatre to share with family and friends.   EVITA is playing until November 3 at the Joan Sutherland Theatre, Sydney Opera House. 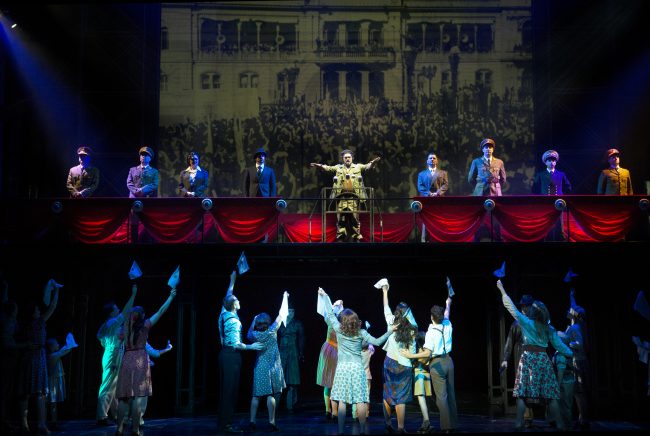