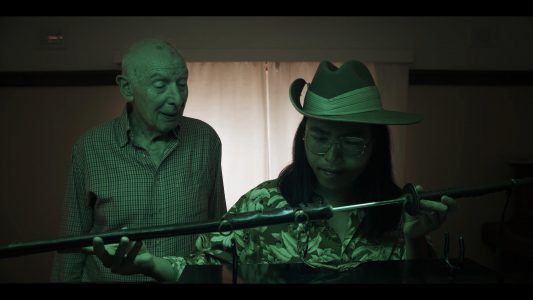 Better to own in hell than rent in heaven.

That’s one of the options for a quad of housemates when they need to find new dwellings pronto in the skittish comedy EVICTION! MODERN ROMANCE.

If not being served an eviction was bad enough, self styled den mother and failed human resources manager, Maggie,(Amanda Maple-Brown) is fired on the very same day, adding to her difficulty in securing a new place to live. Not that fellow house mate, gig economy worker, Will,(Will Suen) is any less shaky in the eyes of landlords, while feuding couple Isabelle (Rose Haining) and May (Clare Cavanagh) are dealing with May’s freeloading and her steadfast inability to commit to the relationship or contribute to the rent.

Aside from their wrestling with real estate agents and rental apps – is there such a word as rentist? – Devereaux throws the quartet into their own divergent stories.

Maggie finds employment with a company that reduces history to a tweet, Will finds fulfillment aiding a crafty old codger, Doug, who regales him with anecdotes from his almost true life adventures, and Isabelle falls for Katie, a sexy barista.

Alan Faulkner is particularly good as the old codger who likes to embroider the truth, as is Beth McMullin who impresses as barista Katie. Both these characters converge and have major impacts on the four friends’ fortunes.

EVICTED! A MODERN ROMANCE plays at the Sydney Film Festival . The June 16 session at Dendy Newtown is already sold out but you can catch it at Randwick Ritz on Saturday June 18 at 3.15.