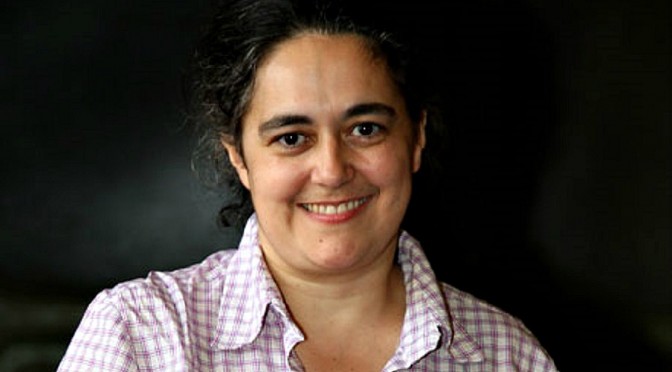 The renowned British artist Tacita Dean is famous for her drawings and film. Dean has the ability to capture in her works qualities that make them not only extraordinarily beautiful but her works have an intimacy that can be almost painful to experience.

The 19th Biennale of Sydney and Carriageworks commissioned Dean to create EVENT FOR A STAGE.  Dean describes how when she was offered a theatre as a performance space she had limited knowledge of theatre and its rituals and disciplines but she immediately thought of the need to find an actor to act on stage. Leaving behind the security of the visual arts, Dean embarked on a journey into the performing arts armed, she modestly claims, only with ignorance and presumptions.

Event for a Stage is presented in the round. Situated inside a large white circle drawn on the ground there is one actor, Stephen Dillane, and two cameras. The cameras are there to film and be part of the performance. They form a tangible connection between Dillane, Dean and the audience and capture the interplay that occurs between artist, actor and audience. They make the audience aware of the artifice of performance, especially as the actor directly refers to the filming process.

The border of the actor’s circle functions as a liminal zone which Dillane crosses when he wishes to share confidences with the audience. Dillane’s performance is astonishing. He reads exquisitely from texts, delivers thundering critiques directed at Dean the ‘artist’. He discusses the rituals and devices of the theatre and tells us painfully moving accounts of his family and their relationship with Australia. These anecdotes, delivered outside the actor’s circle are particularly fascinating as Dillane seems to be sharing intimacies with the audience, or is he being consummate artist seducing us with artifice?

Throughout the performance Dean sits in the front row, unobtrusively in a corner, looking slightly uncomfortable. Once she makes a comment and a number of times she holds out a piece of paper with comments or directions for Dillane on it. Dillane contemptuously snatches these pieces of paper from Dean, pouring out scorn and vitriol as he reads outs Dean’s comments and prompts. He then scrunches these sheets of paper up and throws them away. Interestingly, they always land within the artist’s circle.

The use of cameras, as well as enabling the performance to be recorded, also forms a connection between the known terrain of visual arts for Dean and the world of the performing arts that Dillane reveals to her.  EVENT FOR A STAGE becomes even more engrossing as we become aware that in this performance we are witnessing art reflecting on itself. Dean’s production and Dillane’s performance takes this idea to a whole new level. We are not simply witnessing a rumination on art, rather we are witnessing the visual and the performing arts colliding, shattering and reforming. This extraordinary interaction is why EVENT FOR A STAGE should not be missed.

EVENT FOR A STAGE had its world premiere at Carriageworks between the first and fourth of May. Dean has made recordings and films of the four performances and will be turning them into radio and film versions of the event.