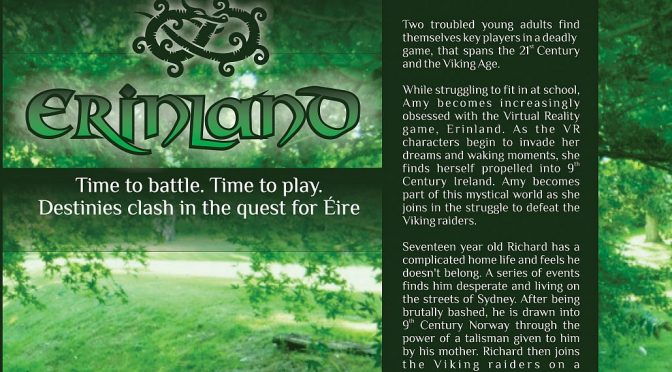 There is nothing that quite matches the feeling of elation that arises after one has published one’s first novel. Especially when the book has been some twenty four years in the making.

It was over two decades ago that Kathryn Berryman read The Book Of Kells at the Trinity College Library in Dublin. The sweeping nature and wonder of the book has always stayed with her, and it stirred within her the wish to create her own work of fantasy.

After a fulfilling working career Kathryn settled down to raise a family. Once her children had finished school and began their adult lives, Kathryn began to focus on putting together her own work of fiction. The result is the fantasy novel, ERINLAND.

In ERINLAND, Kathryn artfully merges the history and mythology of ancient Norway and Ireland (Kathryn herself is part Irish) with the contemporary world.

The scenario sees two troubled young adults, Amy and Richard, find themselves key players in a deadly Virtual Reality game that  spans the 21st Century and the Viking Age. They are determined to finally get themselves to a safe place, and the narrative keeps the reader on tenterhooks.

Kathryn launched her novel recently at a Mahratta reception centre in Wahroonga with family, friends and colleagues present.

She gave a brief speech which started with her saying. ‘Well, Kathryn Berryman – published author. Who would have thought?When I received the proof copy, I was so excited to hold the physical manifestation of all those years of words, images and ideas swirling around in my head!   It was fulfilling to see the characters develop and grow, hopefully jumping off the page and into the reader’s imagination.’

Kathryn’s dream has come true, her fantasy has been realised. Kathryn Berryman’s ERINLAND makes for a great read.  The characters come across vividly, and she holds the readers’ interest right until the final page. Who knows, there may well be a sequel coming up in the not too distant future.

In keeping with the spirit of the book, 10% of all proceeds from ERINLAND will go to supporting Father Riley’s great ‘Youth Off The Streets’ program.