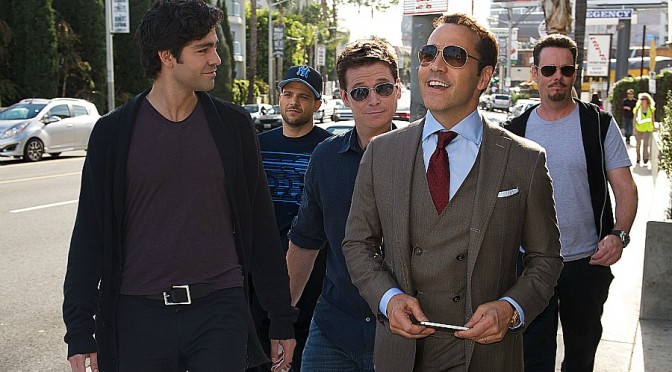 ENTOURAGE, from the popular HBO TV series that lasted eight seasons, has now come to the big screen.

The film is directed by Doug Ellin and produced by Mark Wahlberg, both creators of the TV series which was based on their real life experiences of making it in Hollywood.

Within the story Vincent needs more money to finish his directorial debut for the studio, a futuristic $US100 million DJ drama titled Hyde. To do this, he has to convince the studio head Ari Gold (Jeremy Piven) who in turn has to convince the father and son Texas cowboys, played by Billy Bob Thornton and Haley Joel Osment, who are the major co – financers to the film. The film also features cameo appearances from celebrities including James Cameron, Pharrell Williams, Piers Morgan and Ronda Rousey.

ENTOURAGE, similar in style to films like The Hangover and Horrible Bosses, morphs into nothing more than a film depicting a couple of immature, grown up men living in their own fantasy worlds. While the movie is entertaining and has its funny moments, one’s  interest flags.

Despite its poor reception, the movie has already been profitable in US, taking in $17.8 million over a five-day opening weekend finishing at fourth place at the box office. In Australia, the film opened last week at number one earning $2.6 million.

ENTOURAGE is currently in release.