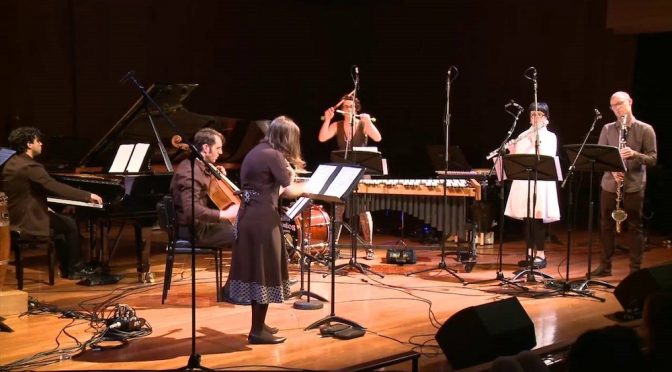 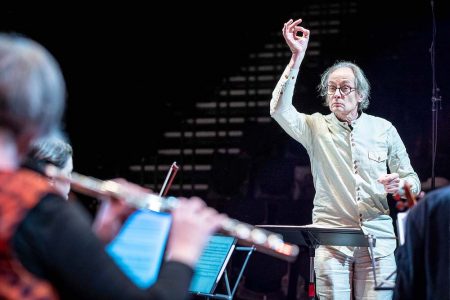 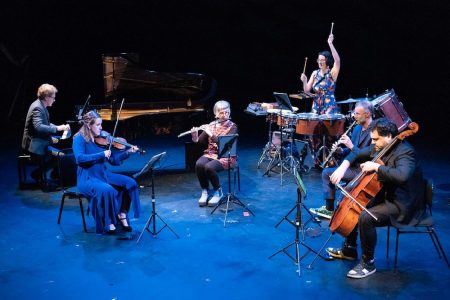 The latest performance by Ensemble Offspring , TIME AS REVELATOR , crackles with electric energy throughout and we are treated to some extraordinary playing by the Ensemble. It was filmed at Carriageworks and streamed by the Australian Digital Concert Hall.

The performance began with Holly Harrison’s  Bend/Boogie/Break for six musicians .It was brisk, bouncy and exuberant with drum solos, a somewhat barbed bass clarinet and cello solos, while yes it used classical music training as a hidden base, it was far more disheveled and irregular.

Next was Steve Reich’s Vermont Counterpoint, originally scored for many flutes, all pre-recorded, with a solo flute. Here though there is an underlying beeping, pulsating melody as well. This work was arranged as a solo by Claire Edwardes, the Artistic Director, who jumped between her xylophone and vibraphone, taking a different melody and embroidering it once the first was played through, demonstrating her  joyous, accomplished finesse and ending with a dramatic flourish. Special mention must be made of Roderick van Gelder ‘s lighting with the flickering shadows.

After an informative, introductory speech by Edwardes regarding the overall concept of the performance – ‘time and rhythm in all its glory’, with a modicum of jazz, repetition , minimalism and funk, repetition, jazz and minimalism we learnt how Plekto,( Braids) by Iannis Xenakis, had an ominous yet shimmering opening  and demonstrates his powerful mastery of counterpoint. Its insistent rhythms ooze and flow spikily.

Next we heard the rich, multi layered and absorbing Hebbian Theory, Mvt I by William Gardiner, a trio for clarinet, prepared piano and violin with its interlocking rhythms and a sinuous, repeated line accompanied by a pounding bass   and periodic piping tremolos. This was the Australian premiere of Gardiner’s piece.

Lastly we heard Rítmicas by Cuban Pulitzer Prize winning composer Tania León , also an Australian premiere .The Ensemble was enlarged to a chamber orchestra of thirteen (including harp, saxophone and French horn ) dynamically, energetically yet precisely conducted by Roland Peelman.

There was terrific playing from all as using polyrhythmic sequences we are transported to a Cuban Carnivale , applying the music of sub-Saharan Africa and  Latin America blended with duo and trio improvisations, including a sensational saxophone, flute and cello trio and a captivating duo for the percussionists. The music tumbled and bubbled in an animated group discussion. It sparkled and burst at times before concluding.