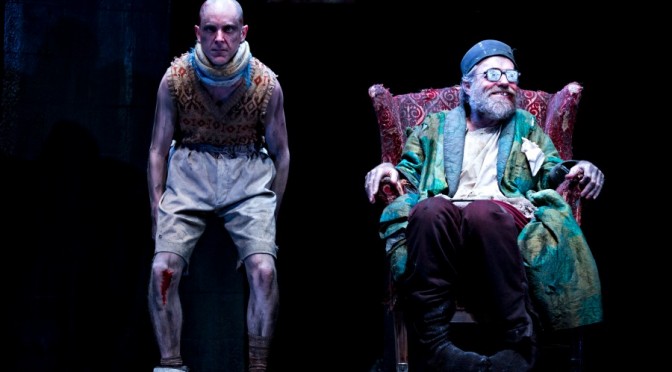 A Samuel Beckett night at the theatre is like no other. One is just taken over by his bold, raw take on life. Even after all these years, one is still gobsmacked, stunned, by what one is taking place on stage. The experience is like being set upon by the coldest, bleakest wind.

So it is with Andrew Upton’s lucid, prescient production of one of Beckett’s greatest works, ENDGAME.

One of our finest actors, Hugo Weaving, delivers one of his most memorable performances as one of Beckett’s most cruel, cantankerous characters, the blind tyrant, Hamm.

It is the last days of Hamm’s bitter life and he vents out all his vitriol, his hatred, his despair on the poor characters that are unfortunate to still be around him. There’s Clov, his haggard servant, and his miserable parents, Nell and Nagg, who have been assigned to dustbins.

The performances by Tom Budge as Clov, just brilliant, and Sarah Peirse and Bruce Spence, as his incarcerated parents are perfectly judged.

Nick Schlieper sets the play in what can best be described as a dark, merciless cavern.

Summing up, this is the kind of play that gives one the creeps. I saw ENDGAME over a week a go, and I am still haunted by it. Hamm’s deeply sadistic nature…Clov endlessly running after him…hunchbacked…climbing up and down ladders…reporting back to him that he has seen nothing.

Under orders of Hamm, Clov going over to the bins to check on Nagg and Nell…opening up the lids and then brusquely closing them again….

All I can say is…be prepared!