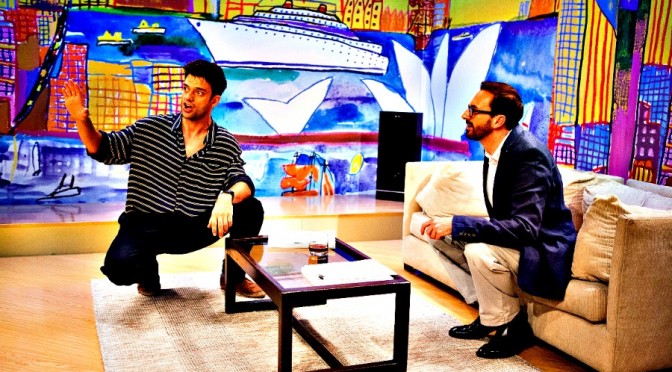 EMERALD CITY pits Melbourne against Sydney and values against cash in the shape of fortysomething Colin Rogers (Mitchell Butel) and his publisher wife Kate (Lucy Bell) who make the move from Melbourne to Sydney, the city that gives good hedonism and where vicious cocktail parties are a necessary evil.

Colin initially loves it, Kate hates it, and over the course of the play they both give in to temptation. In the process, their marriage veers dangerously close to disaster.

The catalyst is Mike McCord, a sleazy stubbly shyster, played to obnoxious perfection by Ben Winspear (a late replacement for Marcus Graham who had to leave the cast due to ill health). Mike latches onto Colin at a cocktail party like a limpet and never loosens his grip, slowly draining his victim of both inspiration and integrity.

The action takes place against a backdrop created by the production’s designer, Ken Done, which roots the play in the 1980s as firmly as the quaintly dated props.

The blues of Done’s Sydney Harbour backdrop appear slightly washed out as if they have been reproduced too many times, apt for a play that has jaded many theatregoers as it rubs away at the gloss of a superficial lifestyle.

Done’s harbour waters are pushed up cheek by jowl against garishly coloured, simply delineated, towering temples of mammon. The set is as sun-drenched as any real estate agent’s clichéd prose and provides the perfect setting for the eternal struggle to get enough cash  to buy a view and all that it represents in this most shallow of cities.

Colin’s agent Elaine has some of the best lines. Right at the beginning she sets the scene with an almost Macbeth-like sense of foreboding when she warns Colin that Sydney’s only ethic “is that there are no ethics, loyalties rearrange themselves daily, treachery is called acumen and honest men are called fools.” She is played by Jennifer Hagan who perfectly epitomises a certain type of briskly efficient Sydney woman of a certain age.

Mitchell Butel as Colin is slightly less convincing as the Melbournian innocent abroad while Kelly Paterniti is a delight as Mike’s sex bomb girlfriend and as energetic as Olivia Newton-John’s Let’s Get Physical video. Gareth Yuen is impeccable as sleek merchant banker Malcolm.

We may have heard it all before and, although it can be argued that it’s time for a new look at Sydney’s venality in a year in which the ICAC tumbrel is piled high with the corpses of once glittering political careers,

EMERALD CITY is as relevant as it’s ever been. And for those new to the play, as well as those eager to renew their acquaintance with a brassy old favourite, Lee Lewis’s deft direction is ideally suited to the 105-seat capacity SBW Stables Theatre.