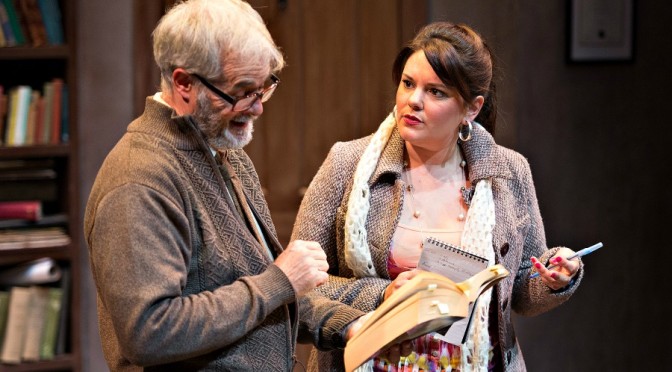 Mark Kilmurrry’s production takes us deeply into this Willy Russell world and its two loveable, vulnerable, very recognisable characters who stay in our hearts long after the house lights have come back up.

We walk into the theatre to be greeted with music from the nineteen eighties, the period in which the play is set, and Anna Gardiner’s finely detailed set of an academic’s chamber.

We first meet literature tutor Frank who is on the phone to his partner to tell  her he will be home. He has to first see a student who is enrolling in the Open University program.

We get to know Frank very well over the course of the play’s two hours. He is given an elegant, rich portrayal by Kilmurry.

A man who grew up with a love of words, he established an academic career. In the heart of his youth he was a poet of some standing. Now middle-aged, gray haired, the muse having long departed,too much in love with the bottle,one broken marriage down, jaded by the unoriginality of many of his students, Frank carries himself as if his best years have long passed him. He is just going through his paces- an Alfred J Prufrock kind of character.

Then into his room and his life walks a young woman, Rita, who wants to do his English literature course. Her vibrant, feisty approach to life turns his head around and gives him a new lease on life.

We, also, get to know Rita very well with Catherine McGraffin’s brassy, impish portrayal. Rita is a bold, high spirited working class girl who knows that she is in a rut in her life…She is in a boring marriage, her hairdressing career doesn’t do much for her…Rita has decided its time to get a bit educated hence her knocking on Frank’s door. Little does she know that the journey she has started on will involve much more than reading a few of Shakespeare’s plays…..

With each meeting in Frank’s room, the friendship and bond between Rita and Frank goes stronger. Not all that either hope for is realised but both their lives have forever changed.

Many will have seen the 1983 movie with Michael Caine and Julie Walters. Not withstanding this, do yourself a favour. Make your way across to Kirribilli’s lovely waterfront theatre and see Educating Rita again. With Kilmurry’s poignant production, you will get your chance to fall in love with Frank and Rita all over again.

EDUCATING RITA is playing the Ensemble Theatre, in tandem with THE SHOE-HORN SONATA until Sunday 28th June.