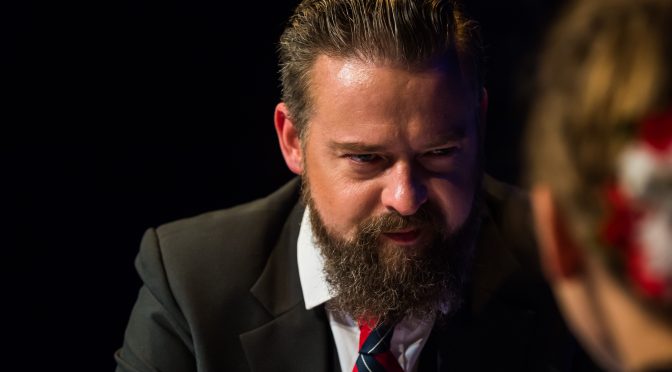 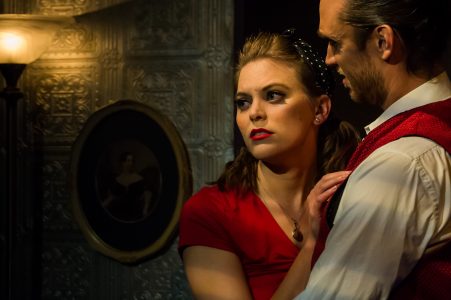 EARTH AND SKY, by Douglas Post, is a gripping and highly entertaining love story/murder mystery, very much in the film noir genre presented by Castle Hill Players. Yet again this company has excelled itself in its production. Here we are drawn into the gritty underlife of Chicago with its underbelly of murderous criminals, seedy bars and police with hats drawn low. It is a haunting mystery, infused with humour, intrigue and even the poetry of Dylan Thomas.

From the opening scenes, the play’s heroine, Sara McKeon, played with fresh enthusiasm and dogged determination by Kate Jirelle, is thrown into a confusing world of contradictions and danger. She confronts all odds with a certain naivety in her search for the truth surrounding the brutal murder of her lover David Ames, played by Jason Spindlow. Spindlow has a wonderfully seedy, sleezy look, he is an enigma – is he innocent or guilty?

Ben Freeman in strong in his role as the streetwise Detective H.S Weber and the almost bad-cop, good cop relationship works well with Blake Michael Paish  as his offsider Detective Al Kersnowski. These two seem more intent on linking David to a previous crime that solving his murder.

There are many twists and turns in the plot involving a variety of colourful identities. There is the cynical, seen-it-all before, bartender Billy Hart, played by Brett Watkins, who works at a dive near where David’s body was found. Then there are two very dubious looking underworld characters Julius Gatz and Carl Eisenstadt, both played by Simon Walker, who profess to have stories to share with Sarah regarding their relationship with David. Of course, there has to be a past lover, Marie Defaria, played by Lara Angseesing, in a true femme fatale style with secrets of her own. Then we have Joyce Lazlo, apparently a library assistant and supportive friend, played by Christine Wilson. 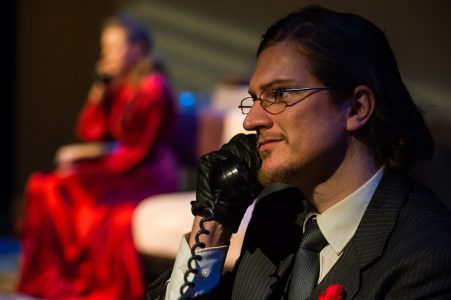 With wonderfully creative direction Faith Jessel has the audience transported to underworld of the story. Cameo appearances by Mitchel Doran, Vanessa Purnama and Lauren Austen-Smith, add authenticity to the different scenes as background characters. These scenes flow seamlessly from one to the other across the stage to the various very cleverly designed sets with their excellent period detail, with the range of costumes adding even greater authenticity to the production. Linking all this together and holding the noir atmosphere is the music, sound and lighting which work together in perfect timing to hold the mood throughout the production.

Come and enjoy a great night at the theatre where the murder mystery goes forward, while the romance moves backward, and see if you can solve the puzzle before all is finally revealed.