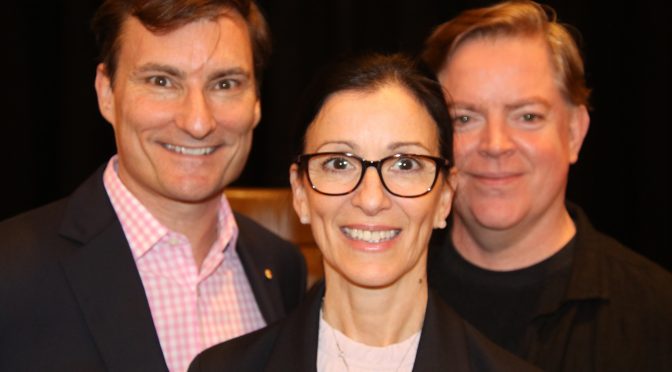 On the 19th April, at a function in the Ballroom of the Four Seasons Hotel, former Artistic Director of the Australian Ballet David McAllister launched his memoir SOAR at a Dymocks Literary lunch.

After an introduction by the Managing Director of Dymocks Mark Newman David McAllister gave his humorous, wide ranging and often self deprecating account of some of the events that took place in his book.

Flanked by two of his closest colleagues, Darren Spowart and Vicki Attard, the trio bounced fond memories and revelatory anecdotes of each other.

Darren Spowart auditioned for the Australian Ballet along with David McAllister and Paul Mercurio. As well as Paul being intimidated by Darren and vice versa, both were in awe of Paul Mercurio. Darren, in particular, admired David’s athletic and flamboyant audition when Darren realised that David was dancing the female roles for the audition.

David admitted freely that his favourite partner was Vicki Attard. Vicki felt the same way. Fresh in their minds was their debut in the principal roles in ‘Swan Lake’. However their favourite collaboration was in the ballet ‘Manon’. With Vicki intending to retire David realised that for he and Vicki ‘Manon’ would be their last roles as the Company’s principals.

Commencing in 2011 David became the seventh Artistic Director in the Australian  Ballet’s history. He expected to last in the position for twenty years and was amazed that he lasted twenty years.

A discussion with the Chairman of the Australian Ballet in 2018 about succession plans put into David’s mind thoughts of retirement. The 20th anniversary of his appointment, and the virility of Covid19, brought those plans to fruition.

In January 2021 David Hallberg was appointed as the Australian Ballet’s 8th Artistic Director.

During the transition period, when the two David’s worked side by side, they gave themselves the names D7 and D8, or as David McAllister preferred – D007.

Covid19 meant that there would not be numerous celebrations and tributes which suited David very well. In addition, during lockdown he was approached by publishers Thames and Hudson to write a memoir. Had he still been working he would have been unreceptive to such an approach, as well as unrealistically believing that he didn’t have anything interesting to say. However with further encouragement David was able to complete his memoir for public consumption.

When questions from the audience were called for, amongst the many interesting queries was one to do with what the member of the Australian Ballet did after their performances. The questioner asked if it was an urban myth that some Company members plunged their feet into ice water?

David and Darren said that in their time as dancers, they would retire to the bar and each have a beer. Vicki would have a gin and tonic.

However on the advice of the recently constituted Australian Ballet Medical Board, the recommendation was the ballerinas do indeed plunge their feet into ice cold waters, and the male dancers would plunge into an ice bath up to their torso. In fact, the Australian Ballet constructed a special purpose built ice bath for the health and welfare of their dancers.

The Australian Ballet comprises 77 dancers and undertakes some 180 performances throughout the year so that the scope for injury is very high. It is to be hoped that as with post match footballers the ice bath regime will lessen injuries to the dancers and help them to recover resiliently for further performances.

David McAllister concluded by saying that a  formal lunch such as this  was a  lovely coda to what he said was a blessed career and life.

Rather than the conventional use of surnames in an article such as this, the given names of the participants have been used to reflect the convivial, informal, relaxed and warm atmosphere that permeated this luncheon.Having witnessed several of these luncheons this inviting and warm feeling is a characteristic of all of these lunches.

You can hear David McAllister’s talk at the Ballroom, the Four Seasons Hotel by clicking on this link: