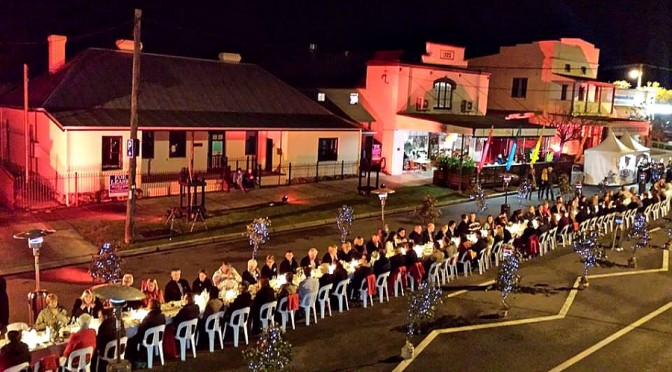 The Dungog Film Festival (DFF) collapsed in 2012 after five years of continuous audience growth from 1,000 to 10,000 people. An amazing feat! In late 2012 the producers partnered with the Sydney Harbour Federation Trust, NSW Mining, Hoyts Cinemas and added a large wad of their own funds to stage the Cockatoo Island Film Festival. Unfortunately the Festival was a financial disaster for all concerned. Check out the event on Google to discover why it failed. It proves a good lesson for all event managers and film makers entering festivals.

The Dungog Film Festival (DFF) had been good for the town and for Australian film makers. In fact, I had my first feature film, CROSS LIFE, screened at the very first DFF and I volunteered and ran a screening venue at two later Dungog Film Festivals. I learned a lot from the creative and collaborative experience of this event and the welcoming people in this town.

In 2014 the Dungog Arts Foundation teamed up with the Shire Council and the NSW Government to re-launch the event as the Dungog Festival (the DFF name had been registered and was closely held by the previous producers).

The first Dungog Festival included the fabulous opening Long Table Dinner, which was held for several hundred people on a 50 metre table on a closed main street; Thursday night markets; a Saturday Farmers Market; a variety of concerts; a barefoot bowls tournament; local tours; film Master Classes (we had a team of actors who ran several script development classes) and at the centre of all these events – A Film Festival!

A range of films were screened over three days at the 500+ seat Art Deco James cinema, the oldest continuously operating cinema in Australia, and the 200 plus seat auditorium in the RSL Club. There was a packed program of features and short films. And many sessions of packed houses. My short, EASY MONEY, was screened on the Saturday afternoon.

In all, I saw a dozen shorts plus three features and really enjoyed the Long Table Dinner, breakfasts in Chillibillies Café, meals and drinks at the RSL and Settlers Arms and the comfortable accommodations at a friend’s parents nearby house. Here is a a pic of myself (far left) and the group I hung out with during the Festival. We wrapped things up with morning tea on Sunday on a cousin’s local farm.

The Dungog Festival was a wonderful three days of film, music, food & wine and camaraderie in a lovely NSW country town – which just a couple of hours north of Sydney. The only shame is it’s no longer a purely Australian Film Festival. But I’ll definitely be back next year.

Below are short reviews of the three feature films that I saw during the Festival. Hopefully all these films will get a general theatrical release.

A fresh, but rather slow, romantic comedy set in a dilapidated motel in the South Australian desert featuring a somewhat tedious nerd, a gorgeous but rather blank girl and a stereotypical macho guy travelling backward and forward through time to fix their fractured relationships. Mildly entertaining, but Back to the Future 2 does the same thing sort of thing much better.

Supermensch: The Legend of Shep Gordon

This remarkable documentary traces the life of Shep Gordon, who is an honourable, generous and loyal human being, a true super mensch. Shep transitions from being a drugged-up band groupie in the seventies to become a drugged-up super talent agent in the eighties and nineties. He launched Alice Cooper to stardom and created and managed many other music stars, built a film production company and then created the category of celebrity chef. Then retired and has held open house on his Maui estate for many years. He even had his wife’s PC repaired by Steve Jobs. This guy is amazing and the interviews and stories contained in this film are riveting and very entertaining. Highly recommended,

What We Do In The Shadows

Image a romantic comedy, styled as a documentary, set in a Big Brother style house occupied by four vampires, aged between 160 and 900 years, with a slave maid who has to clean the blood off the dishes and bathroom tiles several times a week. Place this in present day Wellington, play it straight, add a large serving of mayhem and you have one of the funniest films in years! Highly recommended.

The Dungog Festival went from Thursday 28th to Sunday 31st August at various venues around Dungog.