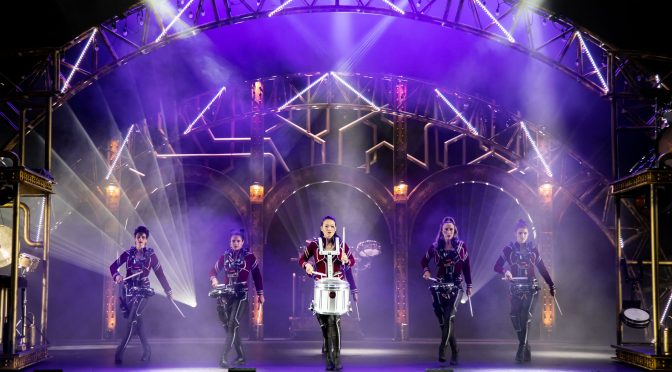 DRUMMER QUEENS, a spectacle of sound, light and action, is a high energy celebration of female percussion. I feel ‘Drummer Queens’ is almost a misnomer as the light show, choreography and musical backing are major components of this exciting performance.

DRUMMER QUEENS is being performed at the Sydney Lyric Theatre, The Star, which is an excellent venue. In a smaller venue this extravagant show would be overwhelming. The Sydney Lyric Theatre is compact enough that the audience does not miss out on the subtle interplay between the performers or the more delicate moments.

As the audience waits for the show to commence there is time to take in the attractive set which has an industrial aesthetic with lots of burnished copper tones. There are drums and symbols scattered around and hanging from copper pipes and metal frames.

The performers striking appearance in Mad Max style costumes is matched by a dynamic light show and the essential element of this show: the drumming. The interplay between the characters by gestures and glances enhances the entertainment and builds an atmosphere of unity.

This unity is strengthened as the drummers move elements of the set around the stage, pushing components together and pulling them apart. This play on unity and disunity is also seen in the drumming as some of it is performed as a battle, akin to a rapper’s battle or a battle of the bands, and some drumming is performed in breathtaking harmony.

There is great variety within the show. There are many types of drums used: snare drums, large temple drums, cajón, full drum sets and electronic, to name a few. These are complemented by triangles, gongs and other percussion instruments. More variety comes from drumming in such styles as a marching band, a full on rock concert, peasants singing in the fields, and electronica. There is general dancing, tap dancing and acrobatics.

In a show like this a theme of empowerment of women is intrinsic. I liked the way they reclaim the marching band and the rock band, but inherently this show centres on strong, talented and dedicated female performers.

One thought on “DRUMMER QUEENS : A GRAND SPECTACLE OF SOUND, LIGHT AND ACTION”