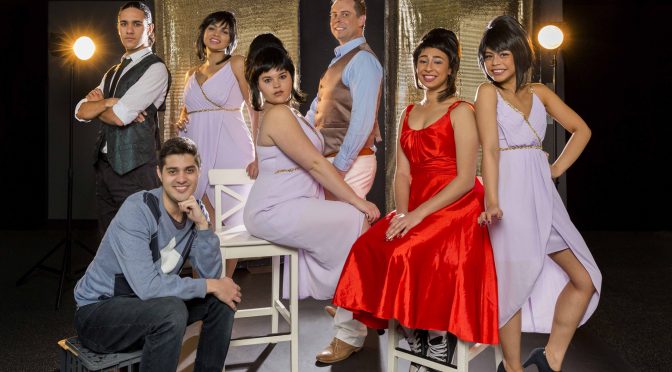 With music by Henry Krieger and lyrics and book by Tom Eyen the musical is based on the show business aspirations and successes of rhythm and blues acts such as The Supremes.

DREAMGIRLS  tells the story of a young female singing trio called “The Dreams” that crosses over to the pop charts in the 1960s to become music superstars, but at a price.

Dreamgirls is not just about exciting singing and dancing as it reveals the behind-the-scenes reality of the entertainment industry, the rivalries, the heartbreak and the tough business side of success.

The original trio, Deena Jones played by Sasha-Lee Saunders, Lorrell Robinson played by Jade Montalvo and Effie White played by Kaleigh Wilkie-Smith all have true, strong voices which harmonise beautifully together. My pick of the performances was by Claudio Acosta who plays Jimmy Early, a popular rhythm and blues star, with whom the Dreamettes, as the trio are originally known, are backup singers for.Under the guidance of Curtis Taylor Jr. played by Quinton Rich, with their song writer and brother C.C, played by Stefan Jamal, the girls learn fast that to become music superstars they need to cross over into the main stream music charts.

Curtis replaces Effie with a new singer, Michelle Morris, played by Liv Wassef, and with each of the girl’s lives taking different paths, they need to make some very life changing decisions both socially and professionally.

A comic touch is added by Carl de Villa in his role as the show announcer and together with Craig Winterburn, who plays Marty, and Blain Kapia as Tiny Joe Dixon, supported by an excellent ensemble of young singers and dancers, the production is a fun and glittering ride. Clever use of video projections adds to the settings and it is all brought alive by a talented band.

As the show progresses the wigs and costumes become more flamboyant. This production, directed by Rod Herbert, with musical direction from Anthony Cutrupi and choreography by Joseph Nalty, is a most enjoyable night at the theatre.

One thought on “DREAMGIRLS : A FUN AND GLITTERING RIDE @ ROCKDALE TOWN HALL”