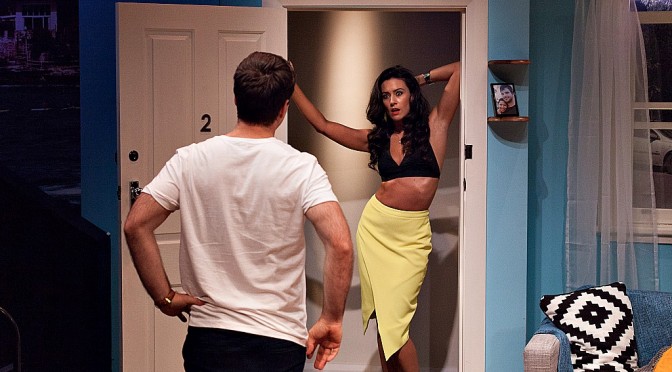 Presented by Ensemble, DREAM HOME is the latest offering from David Williamson. Someone I met at the show  compared Williamson’s comedies to seventies sitcoms: funny, if a little predictable and out of date. I have to admit, that was a perfect description, all the play needed was a laugh track.

The premise of a young couple buying their first apartment in Sydney is promising, but some of the antics that follow are what you would expect: neighbours from hell starting petty disputes over car spaces, and frisky neighbours who are looking for a little on the side. Paul (Guy Edmonds) and his pregnant wife Dana (HaiHa Le) are barely settled in their new home when the other residents of the apartment block come knocking, much to their annoyance. When one neighbour leaves, another quickly takes their place, with the couple never getting a moment to themselves.

Paul quickly becomes the darling of the block, adored by all, even winning over the aggro Lebanese Lion Sam (Justin Stewart Cotta) . He becomes a reluctant father confessor albeit in a more secular style, complete with enough grog to ensure that the confessions become completely graphic and in most cases too much information. A sub plot involving Paul getting a job as a dog catcher provides a few laughs, but the real fun is at the play’s conclusion when the previously placid Paul loses it, shocking all but finally asserting his own rights.

Good performances by all, stand-outs include Guy Edmunds as Paul and Alan Flower as the libidinous Henry. The play’s over the top comedy was reminiscent of the Company’s recent crowd pleaser Absent Friends, another fun and frothy domestic farce.

DREAM HOME is running at the Ensemble until March 28.

This review was orginally published on Joy’s website:- http://www.thebuzzfromsydney.com.